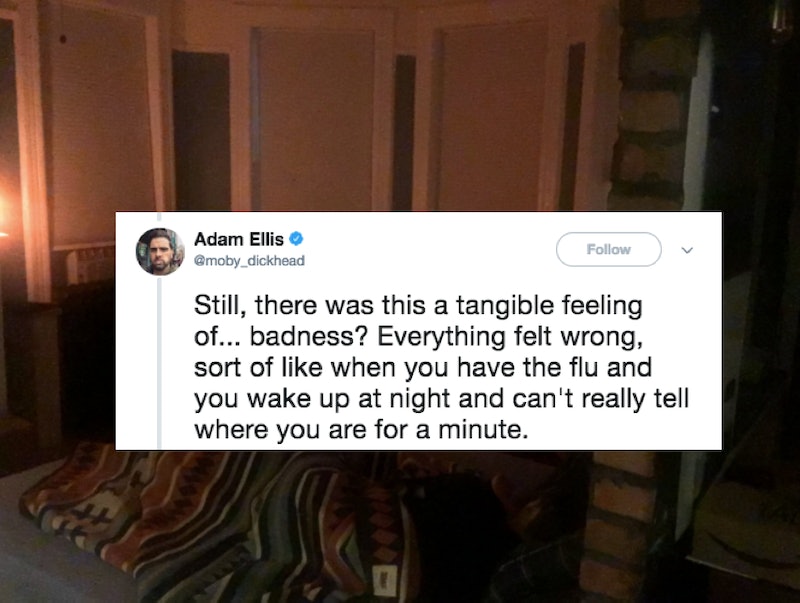 Have you been obsessively checking Adam Ellis’ Twitter account for past few weeks in search of the continuation of Dear David? Me too —and hey, guess what? We’ve got one now. The latest photos in the Dear David ghost story are similar to others we’ve previously seen… but they’re also a lot different, too. They’re a heck of a lot more menacing — and given how menacing the whole thing was already, that’s really saying something.

It’s been just over two weeks since the last update — the one in which, you’ll recall, Ellis opened up the hatch in the ceiling outside his apartment door and subsequently discovered a small child’s shoe and an antique marble. (I still can’t believe he hung onto those items, by the way; part of me wonders whether last night’s update is directly connected to the fact that they’re just, y’know, sitting on his dresser, all casual-like.) This time — as has become his pattern — he started by apologizing for the length of time between updates, noting that the delay has been due to two factors: A) He hadn’t been feeling well, and B) not much of note had been happening. By “not much of note,” though, he really meant that what he was experiencing was more of the same: He wasn’t sleeping well, and he’d been having weird dreams that were “vague and hard to describe.” He also wrote that he’d been feeling “sleepy all day” and been suffering from odd “bouts of dizziness.”

However, on Wednesday night last week — which would make it Dec. 6 — he said he woke up in the middle of the night with a strange feeling:

It happened again the following night (Thursday, Dec. 7) — and this time, it was accompanied by a feeling that he’d just missed something. So, he decided to try something in an attempt to catch whatever it was that he missed:

When he woke up again, he had hundreds of pictures to sort through; based on the fact that the app was set to take a picture once every minute, it looks like Ellis had been asleep for not quite six hours when he "jolted" back awake, as he put it.

Most of the photos, wrote Ellis, just showed him sleeping in his bedroom:

But then… this happened:

“Then, suddenly, he was there. Standing on the chair at the foot of the bed staring at me,” wrote Ellis.

Because Ellis left some lights on, I had no trouble spotting David in the photo above without needing to run it through an image editing program; in case you want a clearer look, though, here’s a brightened-up version of it:

David appears to have stayed there for a minute, adjusting his gaze to look up:

Which might be significant, given the noises Ellis had been hearing above his apartment, the hatch, and what he found in the crawlspace up there during the last update.

In any event, David then did something… weird (well, weirder than usual — this whole thing has been pretty weird right from the get-go, so "doing something weird" is kind of relative at this point):

I did have to brighten up this photo to see David collapsed in the chair; the shadows are such that he’s a little difficult to spot as is:

After a few photos similar photos, David appeared to vanish —but then, about 15 photos (and, therefore, about 15 minutes) later, he reappeared:

Again, I had a tough time spotting him here, so I brightened up the photo; what's more, even after doing that, it still took me a while to find him. I’ve put a red circle around him here in case you, like myself, have never been terrific at Where’s Waldo?-style puzzles:

You can probably guess what happened next, right? I mean, David started on the chair; then he disappeared out of sight for a bit; then he reappeared at the foot of the bed... there’s a logical progression here:

Yep. There it is. Here’s a brighter version of that photo:

What’s more, David seemed to know he was being recorded:

Ellis ended the update with a cliffhanger, as usual:

BUT WAIT. THERE’S MORE. (There’s always more.) Behold what this follower found upon creating a GIF stringing together all of those photos:

If you’ve been following my incessant coverage of the Dear David saga with any sort of regularity, you already know that I am firmly of the opinion that the whole thing is a really well-carried-off hoax — so, I will not belabor that point yet again. Whether these images were photographed with an actual doll representing David directly in the shot, or whether David has been edited in afterwards, pictures like these ones are really easy to fake.

What I do think is interesting, though, is that the plot of the story is circling back round to where it started — which makes me wonder if maybe it’ll be drawing to a close soon. This is the third time we’ve seen this scenario: The first occurred at the very beginning of the story, when Ellis recounted a dream he’d had in which David appeared on a chair in his bedroom, approached the bed, and began crawling towards him; the second occurred at the beginning of November, when he snapped a few photos of David approaching him during what Ellis thought was a dream, but which turned out not to have been; and now, we’ve got this third incident on the books.

Here’s why I think that’s interesting: Structurally, Ellis seems to be setting the story up such that his original dream portends the tale’s climax. Exactly how he intends to resolve it, of course, remains to be seen — but I do think this structure is effective, if it turns out to be what he’s going for.

For what it’s worth, there are a few loose ends that have started to bother me as time has gone on; what happened, for example, to the weird phone calls Ellis was getting? What about the static his sleep app was recording? Why hasn’t the pet cam captured more? Have the cats stopped being bothered by David? Will we see the marble and the shoe come back into the story in any meaningful way? What about the warehouse? I’m not sure whether all — or even any — of these loose ends will get wrapped up when the story concludes; indeed, leaving the questions left unanswered might even lend more realness to the tale. Real life is messy, after all, and actual resolutions aren't often full and complete.)

Either way, though, I’m eager to see where the story will go from here — and how it might end. Is there a light at the end of the tunnel? Only time will tell.