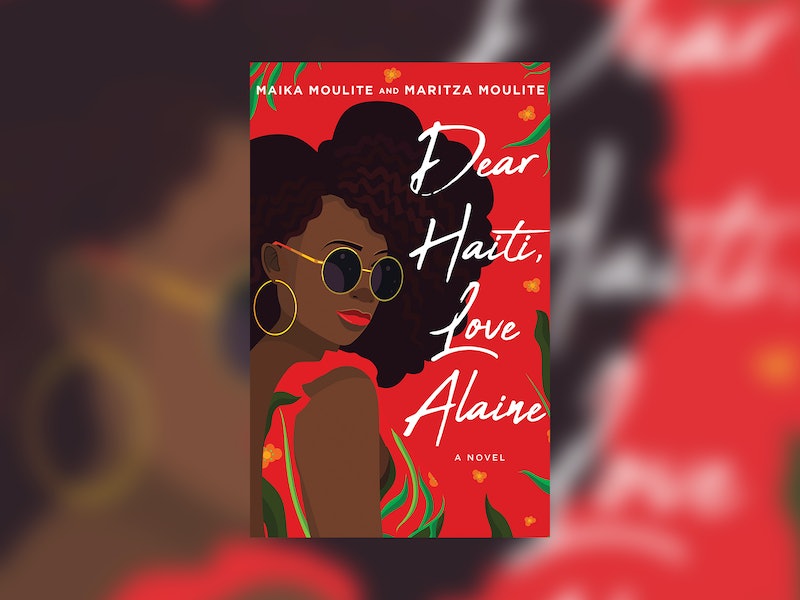 If you love contemporary YA, I have an exclusive first look at one that will definitely excite you. Sisters Maika and Maritza Moulite's debut novel, Dear Haiti, Love Alaine, is coming out this fall, and you can see the cover and read an excerpt below! Keep reading to find out more about this upcoming #ownvoices book.

Dear Haiti, Love Alaine centers on the eponymous Alaine Beauparlant, who lives with her psychoanalyzing dad in Miami, 1,000 miles away from her mom, Celeste, who hosts the roundtable debate show, Sunday Politicos. Alaine's world gets shaken up by two events — a prank that gets her expelled from her prep school, and her normally unflappable mother's on-air breakdown — and both she and Celeste go to live at their family's estate in Haiti. In her parents' homeland for the first time, Alaine begins to uncover family secrets that may lead to a greater understanding of the mother who has lived so far away for so long.

In their debut novel, Maika and Maritza Moulite have attempted to relate and represent their experiences growing up in Miami's Haitian community. Dear Haiti, Love Alaine introduces audiences to Haitian history through the title character's research during her stay in the island nation.

Check out the cover for Dear Haiti, Love Alaine below, and keep scrolling to read an excerpt!

It wasn't personal. I did the math and assessed immediately that I didn't need the extra credit points that having a parent speak at Career Day would provide to get an A in my college prep seminar. Dad was slightly miffed of course when I explained this before politely declining his offer to debate the merits of Freud and Jung in front of my class for the event — but that was to be expected.

"I dunno, I've got this hunch that my peers won't be that into you pontificating about two dead guys with mommy issues for a half hour," I said.

"You would know if I did my presentation that your statement is a gross simplification of the fields of psychoanalysis and analytical psychology," he sniffed. "Pontificate . . . Nice word."

"I still can't shake those darn SAT vocabulary flashcards," I said, piling a mountain of scrambled eggs over my jellied toast. It wasn't a real complaint though. Those cards helped me beat my target score by 5 points. Call me Rumi and Sir because the Ivys were calling my name. "And because I love and respect you, I won't even lie and say I forgot to give you the invitation."

Call me Rumi and Sir because the Ivys were calling my name.

"I suppose that means I haven't failed totally as a parent then," he said wryly as he looked up from his New York Times. I bought him an online subscription for his birthday last year but he still liked to do the crossword puzzles on a hard copy. He let slip once a long time ago that sharing the newspaper used to be his and my mom's Sunday ritual. I could imagine Dad idling in the Health section for a couple of minutes before shuffling through for the wedding announcements and Mom examining the front page with a magnifying glass to confirm her sources hadn't withheld even the tiniest of scoops from her.

Now she was too busy making news on the Sunday morning show she hosted to worry about which politician may or may not have been playing coy during the week. If she (or "the American people!") wanted to get to the bottom of something, she'd just ask said public servant about it on live TV.

" . . . a deep dive into the secretive healthcare bill that will leave millions of Americans uncovered and scrambling for a way to pay . . . "

Mom may have been a thousand miles away from Miami, but her voice was right there with us each weekend, emanating from the family room television into where we ate in the kitchen. Dad rarely watched Sunday Politicos with me unless Mom had a majorly super fancy interview subject (think POTUS), but he did usually pretend not to listen from the table after I grabbed my plate and hopped onto the couch. It was our own special ritual.

This morning though, he rounded up his puzzle and coffee mug and sat beside me in front of the flat screen. I glanced at him but stayed quiet. It was the usual round table setup plus a congressperson or two. No one majorly super fancy.

"This is an important topic," he grunted by way of explanation. “And watching also serves as reinforcement of what it looks like to have a healthy relationship, even post-divorce.”

I pulled the coffee table closer to the couch and made sure that my laptop was safely positioned (I hadn’t dropped it once yet!) to skim the Tweets coming in about Sunday Politicos as I ate my breakfast. On Sundays at 11 A.M. Eastern Standard Time, the social media posts about religious services and dreading Mondays devolved into a cesspool of viewer comments regarding my mother's hosting [in]abilities, her occasionally controversial guests, and her appearance. On the one hand, I loved that there was a community of women of color out there who felt true pride in seeing someone who looked like them #representing. On the other, it never stopped being creepy when some rando shared a YouTube link of a compilation of my mother's legs in skirts "just because." What kind of sexist maniac edits something like that together? And why did it have over 100,000 views?

Not this chick again. What an idiot diversity hire #SundayPoliticos #MourningtheEndofPoliticalJournalism

Idk. Please don't come for me Black Twitter, but is it just me or is Celeste a little off her game today? #SundayPoliticos

Say what you want about my mother (everybody else did), but you had to give her props. She was always the first to say that being on TV was just "the means to a greater end" and that journalism was about "upholding democracy" and giving "a voice to the voiceless" and blah, blah, blah — but the camera loved her. The way she held court at her round table was masterful. Straight up Arthurian. She was the conductor who wasn't afraid to stop the train to put someone in their place and kick them off if need be.

" — How would you know what Americans are concerned about? You're so far removed from — "

" — Oh, please. Give me a break. You own two homes in New Canaan! You're not exactly the woman of the people you think you are. More like Marie Antoinette — "

She was the conductor who wasn't afraid to stop the train to put someone in their place and kick them off if need be.

If anyone interrupted beyond the admittedly higher than what was acceptable in real life (but appropriate for cable news) level, or started getting personal with their insults, Mom always called them out on it fast. She was even known for hounding her booking producer to stay away from the talking heads on other shows who went viral for losing their tempers all at once in their on-screen tic tac toe boxes. She called it "choosing substance over spectacle." I expected her to tell the two opposing flacks who were getting into it to cut the crap in three... two...

What was the hold up?

I looked up from my phone in time to see the countenance of the confident no-nonsense ice queen I was used to flicker into a blank stare. I turned to him to confirm I hadn't been seeing things but my dad's eyes were still transfixed on her.

" — The name calling will have to stop now... uh... " Mom said, touching her hand lightly to her forehead before dropping it quickly. I had never seen her so flustered. I gripped the arm of my seat, as if willing to squeeze the words out for her.

"Of course. Forgive me. Let's take a time out. We'll be right back with more Sunday Politicos."

The rest of the show went smoothly enough, but more than a few people online mentioned the odd moment she seemed to short-circuit. I (obviously) responded to some from the secret Twitter account I reserve for ratchetness and told them where they could shove keep their opinions. I regret nothing.

But off the record... what I didn't say online was how scary it was to watch her freeze like that. Mom never freezes.

Excerpted from Dear Haiti, Love Alaine Copyright © 2019 by Maika Moulite and Maritza Moulite, forthcoming in September 2019 and used with permission from HarperCollins/Inkyard Press.