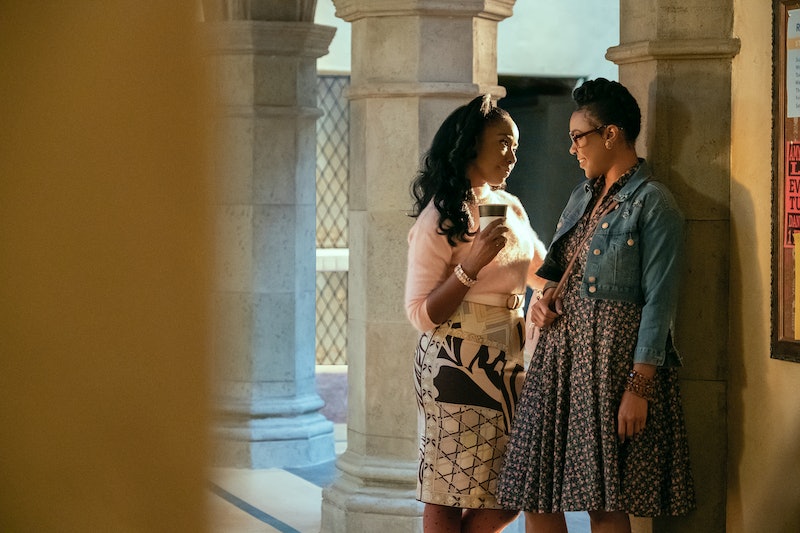 Spoilers ahead for Dear White People Season 3. Kelsey is primarily known as the glamorous, whimsical, and wealthy Trini girl who is out of touch with racial issues and primarily provides comedic relief on Dear White People. But Season 3 expanded on her character, focusing on her identity as a lesbian starting her search for love, involving a short-lived romance with Brooke that doesn’t end quite the way she expected despite being honest about her intentions. It may have seemed like a small storyline amid serious issues like sexual assault and victim blaming, but Kelsey’s Season 3 story on Dear White People is a big turning point for the character that will force her to grow. And highlight an under-explored type of LGTBQ representation.

Sam, Joelle, or even Lionel's arcs have seemed to take precedence over Kelsey's so far, but actress Nia Jervier believes that this season was the perfect time to flesh out her character through exploring her pursuit of romantic love. "The third season is the perfect time," Jervier tells Bustle prior to the Season 3 debut. "Everyone has been wondering 'okay, she came out Season 2 so I hope she finds love in Season 3.' So, it's time to get a taste what that might be like for her. I think people are expecting to hear more about her dog or her freaking out about whatever injustice is happening in the world or on campus. Seeing her showcase her love life is right on time."

Kelsey casually revealed that she was a lesbian last season, which came as a surprise to her roommate Coco and others (including viewers) who assumed she was heterosexual because of her appearance and personality. It’s a stereotype that reflects the real world where women like Kelsey, as well as non-binary/gender-fluid people who present in a feminine manner, are presumed to be heterosexual unless they look, act, or dress in a manner that is deemed masculine.

"[Kelsey's] a lesbian but she doesn't really apply to the heteronormative idea of what a lesbian looks like or acts like," says Jervier. "And, I adore the fact that she comes in this specific package — her voice, the way she looks, the way she dresses, and her sweet naïveté...it's not what people expect of her and surprises are good."

A Cosmopolitan essay by femme writer Sophie Saint Thomas describes the often frustrating experience of being a queer femme as “coming out every day” due to people’s mistake of correlating their physical appearance with sexual preferences. So, it is important to show more women like Kelsey on TV to remind people that a person’s sexuality cannot be shoved into a narrow physical box because they are essentially unrelated.

"Just because Kelsey is a spoiled bougie Black girl at an Ivy League school who happens to be a lesbian doesn't mean she won't feel heartbreak in the same way that a straight White man or anyone else would feel it."

In Season 3, Kelsey realizes that she’s attracted to Brooke and begins to flirt with her during Brooke’s shifts at a coffee shop. They eventually have sex and Kelsey clearly wants to pursue a full-on relationship but Brooke starts to avoid her requests for dates. Kelsey eventually calls Brooke out for being selfish and evasive about what she really wanted out of their relationship. It was an important lesson for Kelsey and a chance to show viewers that she may be sweet, but she will not allow dishonesty nor disrespect in a relationship.

"Kelsey learned that it's okay for her to be sweet and polite but still stand up for herself and I'm so excited for people to see that side of her," affirms Jervier. "I think people would expect her to fall apart from the heartbreak and I think she does the exact opposite. She dials in and stands up for herself. It's another thing you don't expect in her narrative and that runs timely to the theme this season with all of the characters growing, blossoming, and showcasing new things in their personalities."

Brooke responded to Kelsey's call-out by saying she really didn’t know what she wanted until after they spent the night together and was sorry if her truth hurt her (not really a great apology, girl). Kelsey did not accept her apology at that moment, so it remains to be seen if they can salvage a friendship or even pursue a relationship in future seasons. But, Jervier believes the breakup is Kelsey's defining moment for her character this season and one that may cause her to take a bolder stance among her peers.

The complicated love story between Kelsey and Brooke is also a reminder that both parties in any kind of relationship need to gain full clarity on what each person wants and pay attention to others words and actions. Per Psychology Today, one of the most important steps in pursuing a new relationship is believing what people show and say about themselves — and both Kelsey and Brooke were pretty honest about their pasts and intentions.

"I think people would expect her to fall apart from the heartbreak and I think she does the exact opposite. She dials in and stands up for herself."

Kelsey was upfront with Brooke about not wanting to be a part of a sexual experiment, however, Brooke did blatantly tell her that she was involved in several flings with men and wondered if she should just "try a woman" instead. This should have been a major red flag to Kelsey that Brooke probably wouldn’t give her the companionship that she desires right now. Jervier thinks it's the type of common dating mistake that everyone can relate to regardless of where they fall on the sexual or gender spectrum.

"Everyone's gone through a breakup," Jervier says. "And just because Kelsey is a spoiled bougie Black girl at an Ivy League school who happens to be a lesbian doesn't mean she won't feel heartbreak in the same way that a straight White man or anyone else would feel it."

Hopefully, Dear White People will score a fourth season and continue to dive deeper into Kelsey's story as she pursues knowledge, understanding, acceptance, and, of course, her permanent plus one. It's the type of development that Jervier wants to see as Kelsey transitions from being a source of comic relief to a fully realized character.

More like this
The First Clip From Netflix’s Queen Charlotte ‘Bridgerton’ Prequel
By Bustle Editors
The ‘Emily In Paris’ Season 3 Release Date Is Here, Plus The First Footage
By Bustle Staff
Devi Is Going To Meet A “Smoldering Bad Boy” In ‘Never Have I Ever’ Season 4
By Jack Irvin and Gabrielle Bondi
Here's When 'The Crown' Season 5 Will Premiere — And What To Expect
By Bustle Editors
Get Even More From Bustle — Sign Up For The Newsletter