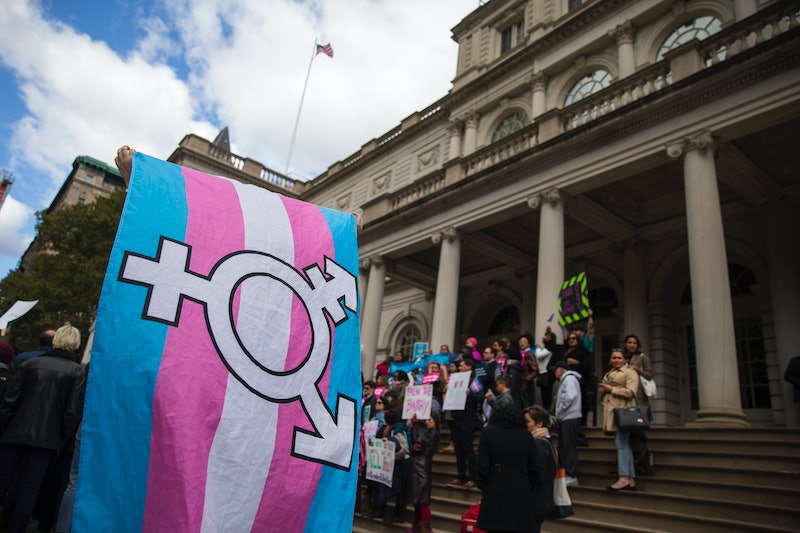 A major blow to the transgender community arrived on Tuesday, when the Supreme Court ruled that the Trump administration's ban on transgender individuals in the military could temporarily stay in place. This controversial decision was met with swift backlash from activists, service members, and members of Congress. Congresswoman Deb Haaland responded to SCOTUS' transgender military ban ruling with a symbolic gesture of her support from her congressional office.

"The trans flag is displayed proudly outside my office door today," Haaland tweeted on Tuesday, along with a photograph of the sky blue, pink, and white striped flag positioned alongside the flag from her home state of New Mexico. She added, "#ProtectTransTroops".

The administration's ban on trans individuals in the military has gone through several levels of the court system on its way to this temporary victory. Trump initially tweeted his announcement in 2017 without warning the Pentagon of his decision, according to Politico. He wrote that trans service members' posed "tremendous medical costs and disruption" to the military.

A few months later, a D.C. District Court judge issued a preliminary injunction to block the ban. Judge Colleen Kollar-Kotelly ruled that the military could not discriminate against existing trans members. The ruling did not, however, force the military to accept new trans individuals or fund gender affirmation surgeries. A month after that, Kollar-Kotelly expanded her initial decision, allowing trans individuals to start enlisting on Jan. 1, 2019.

Despite those rulings, last March Trump unveiled a revised plan that would exclude people with gender dysphoria and people who had had gender affirmation surgeries from serving. Transgender people could only join the military if they served "in their biological sex," according to court documents. A second district court judge ruled in December that the revised ban was still unconstitutional.

"Requiring transgender people to serve in their 'biological sex' does not constitute ‘open’ service in any meaningful way, and cannot reasonably be considered an ‘exception’ to the ban," Judge Marsha Pechman wrote in her ruling.

In December, in order to circumvent the multiple district court rulings, the Justice Department requested that the Supreme Court temporarily implement the ban while the case was still being decided in lower courts. And on Tuesday, the Supreme Court voted 5-4 in favor of the administration's policy, according to CNN.

While the Justice Department applauded the decision, according to CNN, trans rights activists and members of Congress have denounced the ruling as a vindictive political move.

"This is the cruel centerpiece of the Trump administration's agenda to prevent the full inclusion of transgender people in public life," Laura Durso, vice president of the LGBT Research and Communications Project at the Center for American Progress, told CNN. "It undermines military readiness and perpetuates the fear across the transgender and allied communities that this government will not protect them, not even those who would sacrifice everything to protect our nation."

Haaland's office issued a similarly harsh response, calling the ban "devastating" and "blatant discrimination." "Preventing people from devoting their lives to their country simply due to their gender identity is a cruel affront on American values," Haaland wrote. "This irrational ban distracts from service, does nothing to promote military readiness, and directly opposes the American belief in coming together to support our country regardless of background."