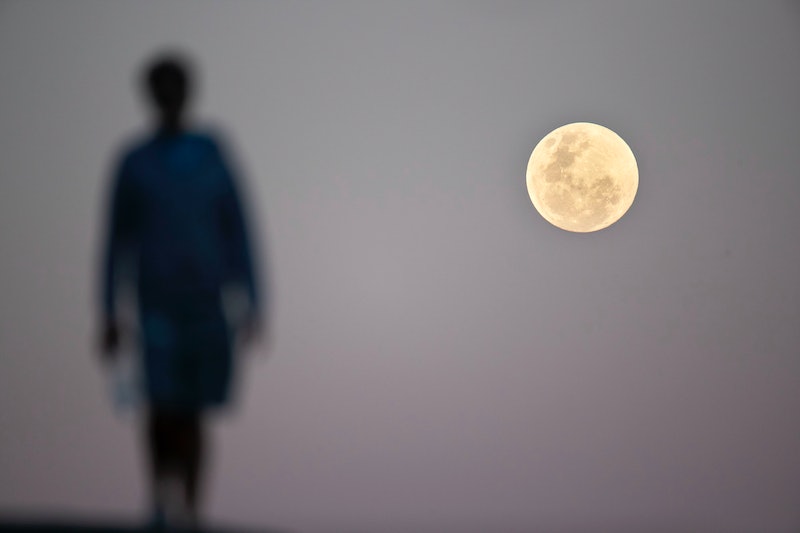 On December 22, 2018 at 12:49 p.m. ET, the last full moon of the year will rise in the sky just after the first day of the winter solstice, drawing the lunar year of 2018 to an illuminating and chilly close. While all full moons are astrologically enriched events, this full moon in particular is laced with all kinds of spiritual and mystical elements because it represents a double closure, and a new beginning. So, if you're sensitive to lunar cycles, you're likely pretty curious about December's full moon astrology predictions because you'd like some time to prepare yourself for the big event.

Closure isn't easy, and when you have the pressure of knowing that a new season has just begun, and that a new year is just around the bend, you might be feeling rushed the clean the slate in time and anxious about looking at yourself in the light. Bustle talked to astrologer Linda Furiate about 2018's last full moon to get a better idea of what we can all anticipate to feel and experience. Spoiler alert: some serious self reflection is on deck, so get ready to look at yourself with kind and keen eyes.

Instead of looking at a full moon as a sort of ominous event, allow yourself to see it an opportunity. According to Furiate, when the sun and moon are opposite each other in the full phase, we are given a special chance to reflect on our lives and relationships with utmost clarity. Quite literally, the stars are aligned for us to have a night of unencumbered contemplation. "In astrology, the axis of Cancer and Capricorn represent our heritage, things that are familiar and how we may position ourselves out in the world," Furiate tells Bustle, shedding some light on a topic that we can expect to come forth this full moon. Combined with the instinct to consider the health of our relationships with our families and the functionality of our relative place in the world, "the full moon is a time to enjoy the bounty of our deeds," Furiate says. So while we might be having a lot of heady internal discussions with ourselves about personal relationships and life goals and accomplishments, we'll also be feeling gratitude for the good work we've already done over the last year. It is at the December full moon's peak that we might finally see all of the ways in which our actions have lead to positive outcomes.

OK, now the more complicated stuff, once you've sorted the good and the bad, it's time to let some things go. According to Furiate, we can't really embrace the birth of a new future (the new lunar cycle, the new year, and the new season) until we let go of the past, so this is a crucial time to do the self work you've been putting off for months. "As the god of Light, the Sun, marks the winter solstice, it is a time of year marked by a celebration of new life, and the opportunity for future growth," Furiate explains the importance of getting rid of things that aren't working for us.

That said, Furiate said it won't be nearly as hard as it sounds. "The full moon in conjunction with the winter solstice may offer many of us the emotional strength and motivation to let go of our fears and insecurities," AKA ride this astrological tide as far as it will take you. Expect to feel emotionally motivated, and lean into that energy. Clear the whole house, get rid of everything that doesn't serve you, as Furiate says that your instincts will be strong, so you can sort with confidence.

If you haven't been putting enough energy in with your family, that deficit will hit you around this time. If a certain pattern of communication with a friend isn't working out, turn over a new leaf and try a new method. If you're not where you want to be with your career, light a fire under your own seat and make some serious goals for yourself to reach in the new year. Whatever you're doing to excel in the world that isn't working, both professionally and personally, stop. Use the mojo the winter solstice is providing you with and change your plan of action. And if you are exactly where you want to be in the world, show yourself some humble gratitude for sowing strong seeds.