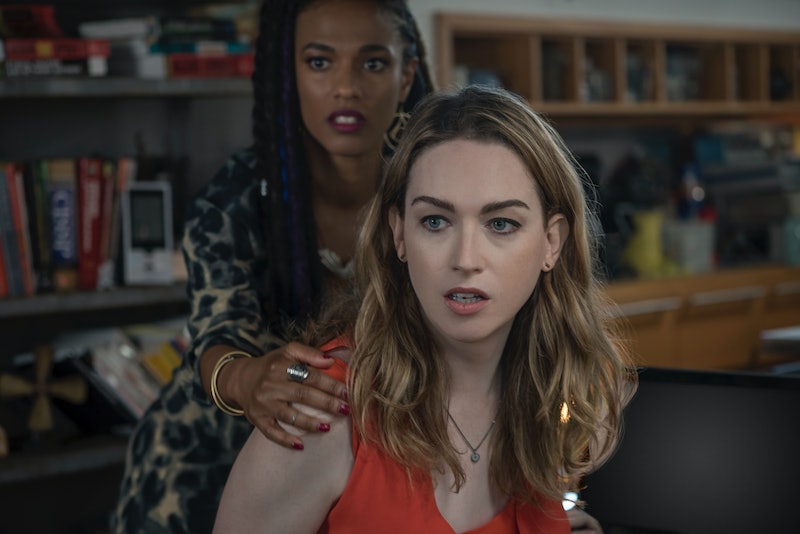 The Netflix sci-fi drama Sense8 is a glossy, rip-roaring allegory for the value of human connection. Created by J. Michael Straczynski (Babylon 5) and Lana and Lily Wachowski (The Matrix movies), the series imagines a reality where groups of people can be so metaphysically linked that they can communicate across thousands of miles, feel each other's touch, and even maneuver one another's bodies. (There's walking a mile in someone else's shoes and then there's this.) The show's second season premieres May 5, and continues celebrates the uniqueness of each member of the "August 8 cluster" that makes up its ensemble — from gender identity to race to sexuality. But its plot laughs in the face of the barriers some would be tempted to erect because of them. Jamie Clayton plays Nomi on Sense8, and if being on the show has driven one point home for her, it's that defining people by their differences is dangerous and restrictive. It's also the product of fear.

"There’s a line Nomi has in the second season. She says, 'Labels are the opposite of understanding,'" Clayton says in an interview at Bustle HQ. The actor is cupping her mug of tea with both hands because she's nursing a sore throat, but her enthusiasm for her show won't allow her to stick to a whisper. "That line — it’s so simple and it’s so direct ... People want to label things because they don’t understand them. It’s like a warning, or a disclaimer."

It's why Clayton, who will appear in the upcoming Michael Fassbender thriller The Snowman, eschews the term "trans actor." It links her gender identity to her work in a way that she finds limiting. "I don’t think that that’s a thing," she says. "You don’t say 'black actor.' My gender has nothing to do with my career."

Yet, there's a societal blueprint for adding qualifiers to everything and everyone. The show presents empathy as an antidote for othering. It's right in line with Clayton's worldview, and, she believes, many of the show's fans.

"I think that the people who watch the show and love Sense8 really get that on a core level, and they’ve been hungry for it," she says.

When I tell Clayton what, for me, is the central thesis of the show — that empathy can be an actual superpower — she literally claps. Each "cluster" has the benefit of experiencing sex, love, pain, and joy through the eyes of people living vastly different lives, but you don't have to be a sensate to start practicing empathy. All people need to do, Clayton tells me, is just try. You may not understand everyone you meet, but all the difference is made when you attempt to see where they're coming from.

"With this job, I’ve gotten to travel all over the world," Clayton says. "It’s really taught me — by seeing all of these places and meeting all of these people everywhere, the core message of this show: which is we are all the same. We all do the same stuff ... It just looks different. That’s what scares people."

As much as the actor dislikes labels, she's all for audiences identifying with the characters they're seeing in their art. And because of its expansive subject matter and filming locations all over the globe, Sense8 is in a unique position to reflect its audience. Nomi and her girlfriend Amanita's (Freema Agyeman) love story is particularly meaningful to couples who don't find many points of connection in mainstream film and TV.

"I did an interview just the other day, and the woman specifically told me she is trans and her partner is cisgender and she said that seeing Nomi and Amanita on screen was the first time that she saw her relationship represented. Because she didn't think that that would ever happen." Clayton says, clearly affected by the conversation. "I’ve thought this, and I haven’t had anyone so far be able to correct me... but I don't think anyone anywhere can turn on Sense8 and not see themselves reflected."

Much of Clayton's screen time is shared with Agyeman, who she dubs "flawless." Clayton values their chemistry for the "authenticity" it brings to a relationship that's so important to so many fans. And the onscreen couple's devotion to each other is only underlined by the fact that just one of them is a sensate. It's hard to imagine taking someone's word for it that they're, say, communicating telepathically with a Kenyan bus driver from their San Francisco houseboat, but Amanita stands by and continues to be Nomi's main source of support in Season 2.

"People would say, 'Why does Amanita have no issue with the fact that she’s hearing these voices?'" Clayton says. "And it’s because Nomi has taken so many strides in her life to be authentic that Amanita wouldn’t think for one second that she’s making this up."

Besides, Nomi and Amanita have enough to deal with, since Season 2 finds them back at their friend Bug's place, still hiding out from the FBI. The mysterious BPO organization is still hunting the sensates too, because for small minds, different equals dangerous. Clayton promises that fans will see more of Nomi saving the day with her ninja hacking skills; and that the season will end with a major event that will need to play out for her character if the show comes back for Season 3. ("Everyone will know exactly what I’m talking about.")

The flash of the slickly produced series is definitely there, but so is plot. So much plot. The web of mythology only gets more tangled in Sense8 Season 2, and Clayton says that its creators have about five possible seasons outlined. But the actor has a tip for anyone who's intimidated by the many plot threads that run through the show.

"What you should do in that sense is focus on the storylines that really appeal to you," the actor recommends. "Each one of our characters could be its own show. Because there’s so many of us it does take time, but if you follow the characters you like and stick with it, I think it’s worth it."

Sense8 is an ambitious series, both in scope and in purpose. But if viewers take its pro-empathy, pro-respect message to heart, Clayton suspects that it just might change the world.