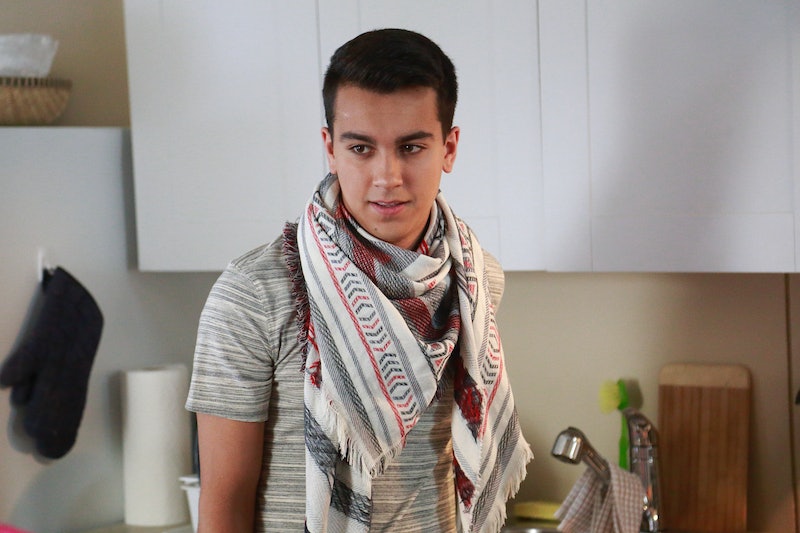 I know that, in 2017, you don't necessarily need another reason to be jealous of Canada. There are spoilers for Season 4 of Degrassi: Next Class ahead. So I'm sorry to say that the excellent way Degrassi: Next Class tackles Islamophobia and terrorism in Season 4 will give you a little hope for the future and make you wish that more shows, particularly American shows, included this kind of representation. Stories like this one make Degrassi practically required viewing, no matter your age.

First of all, the many Muslim characters on the show each represent different points of view — which, wildly enough, is probably the most progressive thing about Degrassi's portrayal. There's no danger of misrepresenting a massive population with a token character.

First, the show has Goldi, a moderate activist who was born and raised in Canada. Meanwhile, her brother Baaz is defined more by his gaming skills than his religion and ethnicity. Then there's Rasha and Saad, who are both Syrian refugees. However, Rasha is from a big city with relaxed values, whereas Saad and his sister Abra are from the more conservative country.

In the middle of the season when Saad and Goldi disagree over how to appropriately respond to a (fictional) terrorist attack in Belgium, Degrassi is able to show a nuanced and balanced discussion about an event that parallels real tragedies. As a Syrian refugee, Saad feels as though the solidarity for Brussels reads superficial and takes attention away from terrorist victims in his home country.

Saad also becomes a target for bullies this season, and the first few episodes of Season 4 show how easily scapegoating can turn into hate and reveal a deep prejudice. In order to shift blame off of Zig and herself, Esme tries to pin Maya's suicide attempt on Saad, who took morbid pictures of her and didn't recognize the signs of her depression and suicidal ideation. This causes a fight and leads to Zig and Tiny targeting Saad.

Not long after, Lola accuses him of stealing money from her tip jar, when it was Shae the whole time. Little things like this add up and cause Saad to feel homesick and unwelcome in Canada. As usual, the tension builds towards the end of the season, but this particular story rings truer than ever in 2017.

In previous seasons, Degrassi: Next Class has built longer arcs centered around other hot button current issues, such as Gamergate and the Black Lives Matter movement. What Degrassi has done this time around is put the narrative in the hands of Muslim characters who are not defined by just their faith or stereotypes associated with their religion — heck, Saad was introduced as a photographer — but can certainly speak to the experiences of a wide variety of viewers and make for excellent storytelling that is desperately needed on television right now.