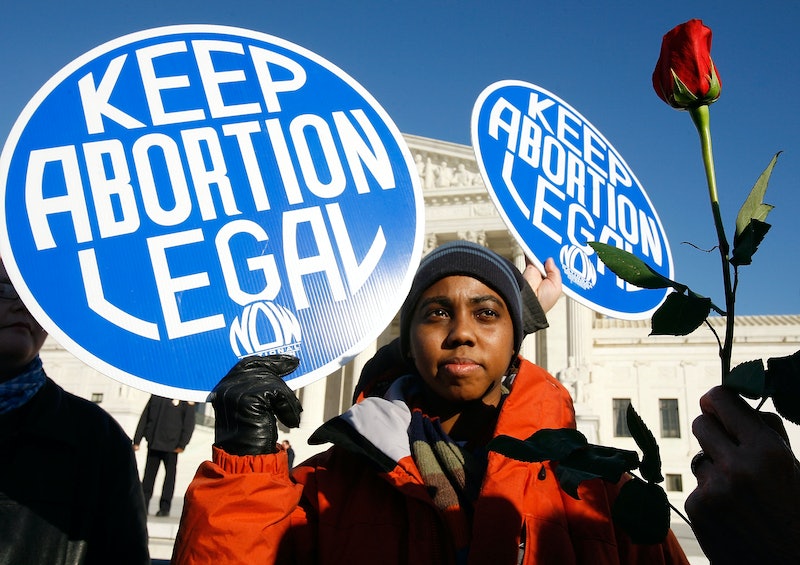 Delaware lawmakers are set to vote Tuesday on a bill that would codify a woman's right to have an abortion, meaning that even if Roe v. Wade is overturned, as Trump has vowed it will be, women in Delaware will still have access to abortion services. The bill has already passed through the state Senate and now faces the Democrat-controlled House of Representatives. If the bill is indeed signed into law by Delaware Governor John Carney Jr., who is also a Democrat, the state would be the first to secure a woman's right to an abortion since Trump took office.

The Trump administration and Republican-controlled Congress have vowed to turn back the clock on abortion. In his budget proposal, the president suggested that Congress defund Planned Parenthood and other abortion providers. (It's important to note though that because of the 1976 Hyde Amendment, clinics are not allowed to use federal money for abortions, except in the case of rape or incest.) Trump has also strengthened the global gag rule, which limits foreign aid funding to international groups that mention abortion or speak out about abortion rights.

Currently, Delaware laws allow abortions only if the pregnancy puts the mother's health at risk, if the pregnancy is a result from rape or incest, or if the child would be born with severe disabilities. The state also prohibits abortions past 20 weeks. The bill that the Delaware House is set to vote on removes all restrictions on abortions before a fetus reaches viability. The legislation does make the exception though that abortions can be performed after viability if a doctor believes the woman's health is in danger or that the baby would need extraordinary medical treatments to survive.

According the Guttmacher Institute, Delaware has the highest rate of unintended pregnancies in the United States — in 2010, it was 62 per 1,000 women ages 15 through 44. The institute also reported that nationally, at least 36% of pregnancies in 2010 were unintended.

Perhaps in part due to this high rate of unintended pregnancies, Delaware recently implemented a program called Delaware CAN, which aims to educate medical providers on contraception, particularly in the insertion and removal of intrauterine devices, which are more commonly known as IUDs. The education component of the collaboration is being conducted by a group called Upstream USA. The program, initially begun by Carney's gubernatorial predecessor, will be fully implemented by the end of 2017. Clearly, with this program and the abortion rights bill that the Delaware House may pass on Tuesday, the state is working hard to get its act together on the women's health front.