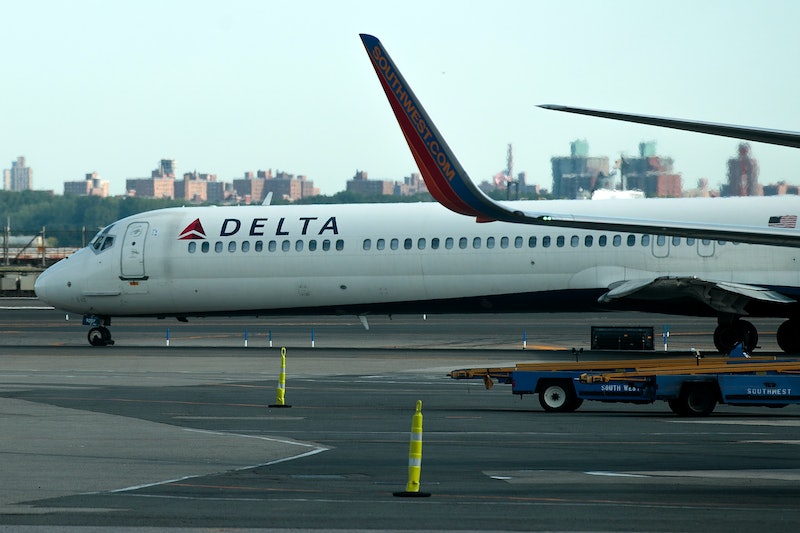 A frightening event transpired on a Delta Airlines flight bound from Seattle, Washington to Beijing, China on Thursday. According to reports, a passenger on the flight began acting erratically, and even tried to open one of the cabin's exit doors before being forcibly restrained by flight attendants and passengers. And from the sounds of things, the word "forcibly" might be a bit of an understatement: one Delta employee smashed a wine bottle on the passenger's head to try to subdue him, although it apparently didn't work as well as one might assume.

According to CBS News, Joseph Daniel Hudek IV ― a resident of Tampa, Florida ― is currently facing federal criminal charges over the incident, the alleged details of which were laid out in a probable cause statement filed by an FBI special agent on Friday.

According to the statement, Hudek was flying on a "dependent pass," reserved for family members of Delta employees; his mother reportedly works for the company. He boarded the plane, ordered a beer, and showed no signs of peculiar or hazardous behavior in the early stages of the flight. Once the plane was in the air, however, he allegedly went into the bathroom, popped out briefly to ask a flight attendant a question, went back inside, then emerged minutes later and suddenly tried to open the exit door.

That was when people sprung into action, with one flight attendant grabbing two wine bottles and cracking them over Hudek's head. According to the statement, Hudek seemed largely unaffected by being struck by the bottles, however.

"Hudek did not seem impacted by the breaking of a full liter red wine bottle over his head, and instead shouted, 'Do you know who I am?' or something to that extent," said a flight attendant, according to the statement.

Hudek was not the only person allegedly struck by a wine bottle, either. According to the account, he was actually the first to use a bottle to strike a fellow passenger. While the specific details are unclear, two people, a flight attendant and a passenger, reportedly had to go to the hospital with "severe facial injuries" after the incident.

Fortunately, at no point did Hudek succeed in opening the door, which with the plane in mid-air over the Pacific Ocean, likely would've had disastrous consequences.

He was restrained with zip ties ― although he reportedly "remained combative" the whole time, even when law enforcement took him into custody ― and the plane flew back to Seattle to have him removed. If he's convicted, Hudek could face up to 20 years in prison.