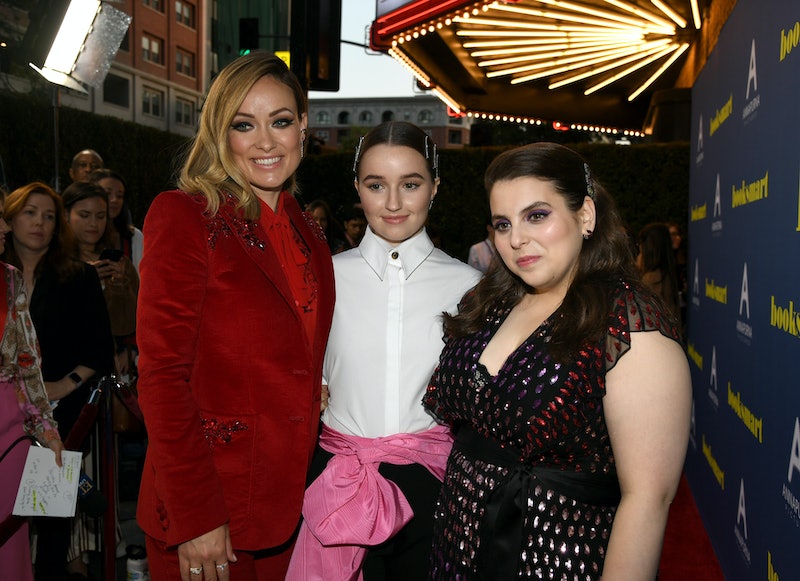 Days after the airline was criticized by passengers and film fans everywhere for their unfair censoring of LGBTQ+ films, Delta is restoring same-sex love scenes to Booksmart and Rocketman so that passengers can enjoy their in-flight films their original form. In a new statement to Entertainment Weekly, Delta confirmed that they are restoring the same-sex love scenes to Booksmart as well as those that had been cut from Rocketman, to which Wilde responded on Twitter, "Thank you, Delta." Bustle reached out to representatives for Elton John, Taron Egerton and Dexter Fletcher for comment on the restoration of Rocketman's censored scenes, but have not heard back.

"We are immediately putting a new process in place for managing content available through Delta’s in-flight entertainment," Delta said in the statement to EW. “Studios often provide videos in two forms: a theatrical, original version and an edited version. We selected the edited version and now realize content well within our guidelines was unnecessarily excluded from both films. We are working to make sure this doesn’t happen again."

The statement continued, "The studio has agreed to provide a special Delta edit that retains the LGBTQ+ love scenes in both Booksmart and Rocketman that will be on our flights as soon as possible." Delta also noted that they currently offer several LGBTQ-centric films and shows, including Moonlight and Gentleman Jack, as part of their in-flight entertainment service, adding that "it is not our practice to omit LGBTQ+ love scenes."

On Oct. 27, Booksmart director Olivia Wilde wrote on Twitter that she was upset to hear that a climactic kiss between Amy (Katlyn Dever) and Hope (Diana Silvers) had been edited out of the in-flight version of the movie offered on Delta, as well as the word "lesbian."

At the SCAD Savannah Film Festival on Oct. 30, Wilde called out the airline during a Q&A session for censoring the movie in such a "slanted" manner, and cutting out scenes that involved female sexuality. In a statement to Bustle at the time, Delta responded that they choose the versions of films shown in-flight from options offered by a third-party censor, adding that "we value diversity and inclusion as core to our culture" and planned to "review our processes to ensure edited video content doesn't conflict with these values."

According to Wilde, the "Barbie scene" — in which Molly (Beanie Feldstein) and Amy hallucinate that they have transformed into dolls and are terrified by their Barbie-esque bodies — was also edited. "They cut the second half of the animated doll sequence, because naked doll bodies - made for children - are too shocking even with no genitals," the director wrote on Twitter. As part of her Twitter thread, Wilde pointed out the harmful impact that the "slanted" censoring of Booksmart can have on female viewers: "What message is this sending to viewers and especially to women? That their bodies are obscene? That their sexuality is shameful?"

According to a series of tweets from EW digital director Shana Krochmal, the edit of Rocketman shown on Delta flights "stripped" the movie of "almost every gay reference or scene" including a chaste kiss between Elton John (Egerton) and John Reid (Richard Madden). Krochmal also pointed out that the version shown in-flight "left in a scene of John Reid assaulting Elton but removed any evidence of intimacy between them," adding, "What is that saying is OK?"

While nobody involved with Rocketman has publicly commented on the in-flight edits, in May, John protested that the Russian release of the film had been censored in accordance with the country's "homosexual propoganda" laws. "We reject in the strongest possible terms the decision to pander to local laws and censor Rocketman for the Russian market," a statement from the musician and filmmakers read at the time. "We believe in building bridges and open dialogue, and will continue to push for the breaking down of barriers until all people are heard equally across the world."