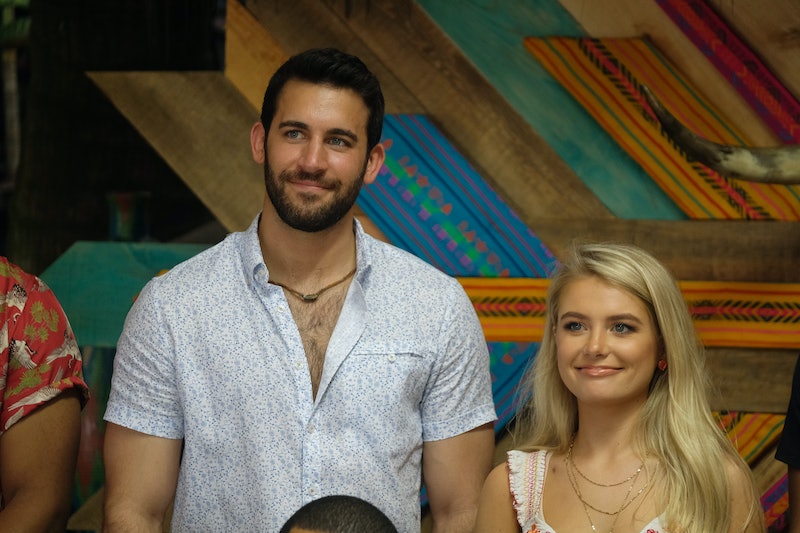 Monday night's Bachelor in Paradise premiere was full of drama and a couple of hookups... and one of those hookups has already come with the best reaction video. As if Derek and Demi making out on BIP wasn't entertaining enough on its own (as most moments of the show are when Demi is on screen), we now know exactly how Derek felt watching it back.

If you caught the premiere, you already know that not long after everyone arrived in paradise, Derek and Demi somehow ended up making out while hanging out in the water together... and although this particular moment was definitely unexpected, it was also pretty steamy. During the episode, prolific Bachelor Nation tweeter Brett Vergara shared a video of Derek watching their hookup in the hot tub go down, and instead of offering up any kind of explanation, he just shrugged. But honestly, that pretty much says it all.

And at least he's keeping a good sense of humor about it all, because watching back footage of yourself making out with someone on national television has to be at least a little awkward — especially since Demi was talking about him being a good kisser in the clip. But as you can see in this video, he was totally a good sport:

And although the comparisons to Jim Halpert were rampant while Derek was on JoJo Fletcher's season of The Bachelorette, seeing this video is making fans spot the resemblance all over again, because the way that Derek looks at the camera in this video is exactly how Jim would react to something like this on The Office.

The replies to the tweet were absolutely flooded with Jim GIFs, so it's safe to say that Derek can never escape the comparisons — not that they're a bad thing.

It seems like Demi found this all pretty funny, too, being that she retweeted the video on her own page, as well as sharing this GIF of herself from the official BIP Twitter, writing, "I love frenchin'."

Since we know that Demi is interested in a mystery woman who will be making an appearance later this season, there's no telling how long this fling between Demi and Derek will last. After all, this is only the beginning of BIP — and as fans know, pretty much all bets are off in paradise.

Hopefully, there will be plenty more of Derek's hilarious reaction videos to come. If the premiere is any indication of how the rest of the season will go, it looks like fans have a lot to look forward to.