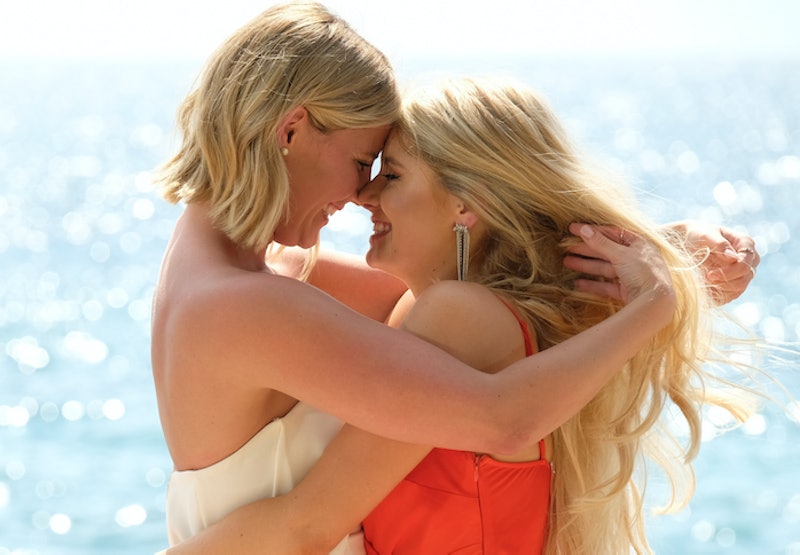 The dust may have only begun to settle around their Bachelor in Paradise engagement, but Demi and Kristian are already looking ahead. They don't yet have a wedding date set, but they did tell Good Morning America they want kids someday. Demi has even (jokingly?) picked out a name for their first child: Demi Jr.

For now, though, they're just happy to be enjoying their relationship out in the open. "It feels good to be able to like just own it, rock the ring and walk around the street and not have to worry about spoiling the show," Demi said on GMA. And though they had a head start on other BiP contestants because they dated before the show, they're also still getting to know one another better. "Our engagement was a commitment to each other, so we're still at the beginning of a relationship and we're still figuring it out," Demi added.

Kristian never had any intention of being on a reality show (she's usually behind the camera as a video producer, as noted in her Instagram bio), but as she said on Paradise, she didn't want to lose Demi, so she followed her to Mexico. She also set the record straight for any naysayers who think it was all just a ploy for ratings.

"I never really watched much of Bachelor Nation or even thought in a million years I'd be on a reality show," Kristian said. "I know I've said that before in past interviews but I can tell you it was all very real."

As the first same-gender couple to get engaged as part of the Bachelor franchise, the couple also has a lot of eyes on them right now — something that they don't take lightly.

"That's a lot of pressure to be a role model," Demi said. "But I do understand, like, we are [role models] in a sense and if we can make people feel more comfortable with their sexuality, I'm super grateful for that and I'm really proud to be that person."

And even though she struggled throughout the season to come to terms with her sexuality, Demi is also really proud to be with her new fiancée. "“I think there was just a lot of, like, walls within myself and like a lot of parts of myself that I wasn't fully in tune with and didn't really understand," she said on GMA. "It's really cool to be with somebody that you're so proud to be with."

Kristian tried to say the same about Demi, but became too overwhelmed with happiness to articulate it. "I just love you," she told Demi, kissing her on the cheek.

Since the BiP finale aired on Sept. 17, Kristian and Demi haven't announced any wedding plans (it has only been a week). But if fans are lucky, the couple will return to Paradise to tie the knot like many BiP couples before them. That way, they can make history on the franchise yet again — and we can all bear witness to yet another blissful BiP wedding. Hopefully, Demi Jr. won't be far behind.