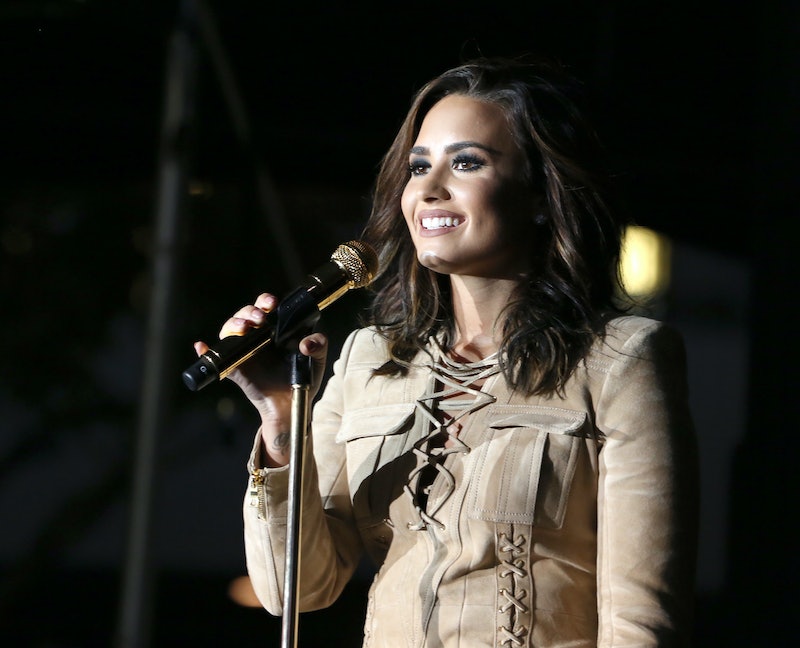 Demi Lovato has taken on the iconic lead role of Smurfette in the upcoming film Smurfs: The Lost Village, and it's already a game-changer. The film hasn't even premiered yet but Lovato's role in it has made Smurfs history. It's been revealed that the film, out April 7, not only explains why Smurfette has been the only female Smurf all these years, but that there are other female Smurfs out there as well. The actor was thrilled to explain why she's honored to be part of the huge revelation in the story, and how she can relate to Smurfette's journey in more ways than one.

Lovato described the new installment to me as "Smurfette trying to figure out her purpose and her identity in a world where everyone around her has their own special thing." Smurfette steps up to the plate as the leader of the pack in Lost Village, not only on a mission to learn about herself, but the newly-discovered Lost Village as well.

"I think it’s really cool to be a part of the film that explains why she’s the only [female] Smurf," Lovato told me when sitting down together. "Everybody always wonders, ‘Why is there only one girl?’ To be able to be part of the explanation is really exciting and really groundbreaking in the Smurf world."

Smurfs fan or not, female or not, Lovato said Smurfette's story in the upcoming film is for everyone. "Playing a strong female lead can speak to all audiences. No matter, if you’re the odd one out, you can go for your dreams," she said.

The experience was so special for Lovato because she saw so much of herself in her character. "I think we’re both brave. We’re both curious. When it comes to going after things that we want to figure out, we’re both driven," Lovato explained to the crowd during a press Q&A. "I really love that about the character," she told me.

During my interview, Lovato reflected on her past experience of holding it down as a female in a pack of males. "I remember being 15 on tour and I was surrounded by guys," she said to me. "My whole band was guys on the tour bus, my dad was on the road, I was on the road with the Jonas Brothers." But such experiences helped her grow. "Being the only girl I learned to hold it down. Now, I have incredible women around me. But I learned back then."

As far as the movie goes, Lovato teased that her character will be just as thrilled as fans to learn about the other female Smurfs in the story's universe. And director Kelly Asbury gave some hints as to what audiences can expect from the "self-sufficient and determined" women Smurfs that will be introduced.

Lovato was joined by actors such as Ellie Kemper, the bubbly Smurf, Michelle Rodriguez, the tough Smurf, and Julia Roberts, whose character SmurfWillow has “Erin Brockovich toughness and a lot of heart," according to the director. He explained why each of the females will be as strong-willed as Smurfette.

"SmurfWillow raised them to be that way, to be whatever they want to be. We wanted individual characters who are very happy being who they are," he told me.

Smurfette's adventure will likely resonate as one audiences won't want to miss.