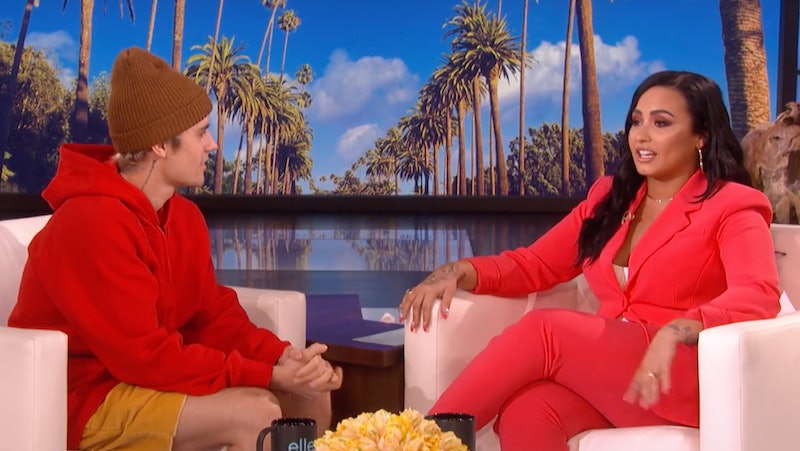 The Ellen Show via YouTube
By Jessica Wang
March 7, 2020

While guest hosting the Ellen DeGeneres Show, Demi Lovato said Justin Bieber served as “inspiration” throughout her recovery process. Bieber, who has long been vocal about drug use and mental health, joined the guest host to discuss their shared experiences on Friday. When Bieber spoke about being vulnerable in his YouTube docuseries, Justin Bieber: Seasons, Lovato revealed that she looked to the “Intentions” singer during her own struggles.

“There's a fear in showing vulnerability and [...] stuff that you feel people will say, 'You look weak,'” Bieber said about his docuseries. "But I think the more mature you become, you understand that there's power in your weakness. When you're able to show that, it gives other people the confidence to say, 'You know what? I'm going through similar things myself.’” He added, “So, just having the confidence and being able to instill that confidence in young people that it's OK to have problems… I just feel if we're open and honest about that it creates a dialogue.”

Bieber’s response resonated with Lovato, who said, “When I struggled last year, I know I looked at you as an inspiration because you've been through this and you've come out the other side, and I really just admire the man that you are today.”

The interview comes after Lovato debuted her new song “I Love Me” on Friday. She also released a music video for the empowering ballad that referenced different facets of her life: in a possible nod to her overdose, she walks by a woman on a stretcher being escorted onto an ambulance. Prior to her guest host stint on Friday, Lovato appeared on Ellen on Thursday to discuss the new song and reflect on her sobriety.

"I think it's important that I sit here on this stage and tell you at home, or you in the audience, or you right here that if you do go through this, you yourself can get through it," Lovato said. "You can get to the other side and it may be bumpy, but you are a 10 out of 10." She added, "As long as you take the responsibility, you can move past it and learn to love yourself the way that you deserve to be loved."