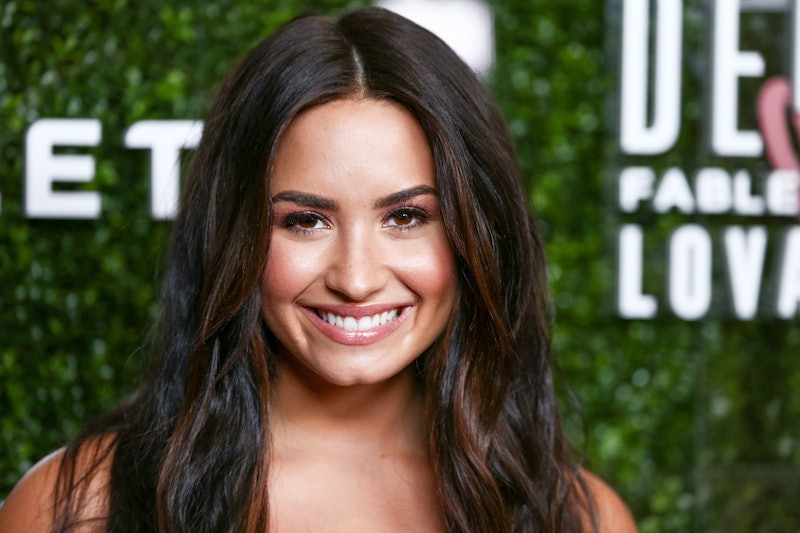 Demi Lovato is back with a vengeance. Lovato's new song "Sorry Not Sorry" is a fire response to any ex who's ever made you feel like you weren't good enough. "Payback is a bad b*tch/And baby, I'm the baddest," she sings, and you better believe it. In fact, many of the "Sorry Not Sorry" lyrics will be the confidence boost you need to take on all the haters this summer and beyond. This is Lovato's guide to living your best life after a breakup.

After taking a break from recording last October to "step away from all the craziness," as she wrote on Instagram on Monday, she's ready to once again rule the Billboard chart. The beat behind this latest track, produced by Zaire Koalo, Trevor Brown, and Warren "Oak" Felder, certainly helps, but it's the "Confident" singer's "savage" attitude that will get you on every listen.

That's because Lovato isn't playing coy about how much better she is without her ex. In fact, she's bragging about it at nearly every turn, singing that she's "feelin' like a 10, the best I ever been." As she sings in the first verse:

Ain't too proud to beg, second chance you'll never get

And yeah, I know how bad it must hurt to see me like this

But it gets worse (wait a minute)

Oh, and it does. It really does. Lovato knows what he lost and is letting him stew with that a second. In fact, she's letting him know at every turn that it's his loss, not hers. "Feeling inspired 'cause the tables have turned," she sings. "Yeah, I'm on fire and I know that it burns."

Now all she wants to say is "bye, boy," but not before rubbing some salt in that open wound.

'Cause the grass is greener under me

Bright as technicolor, I can tell that you can see

And yeah, I know how bad it must hurt to see me like this

While the fact that Lovato got out of a nearly six-year relationship with Wilmer Valderrama will have some speculating this track is aimed at him, knowing the two have remained friends since calling it quits makes it hard to believe. But the genius of this track is that, either way, it doesn't matter who "Sorry Not Sorry" is about because its message is universal.

Breaking up is hard to do, but it's not impossible to move past. Lovato is just showing anyone who's had a broken heart that it gets better. From the sounds of this track, she'd go as far to say that it's the best thing that ever happened to her. And there's definitely no reason to feel sorry about that.