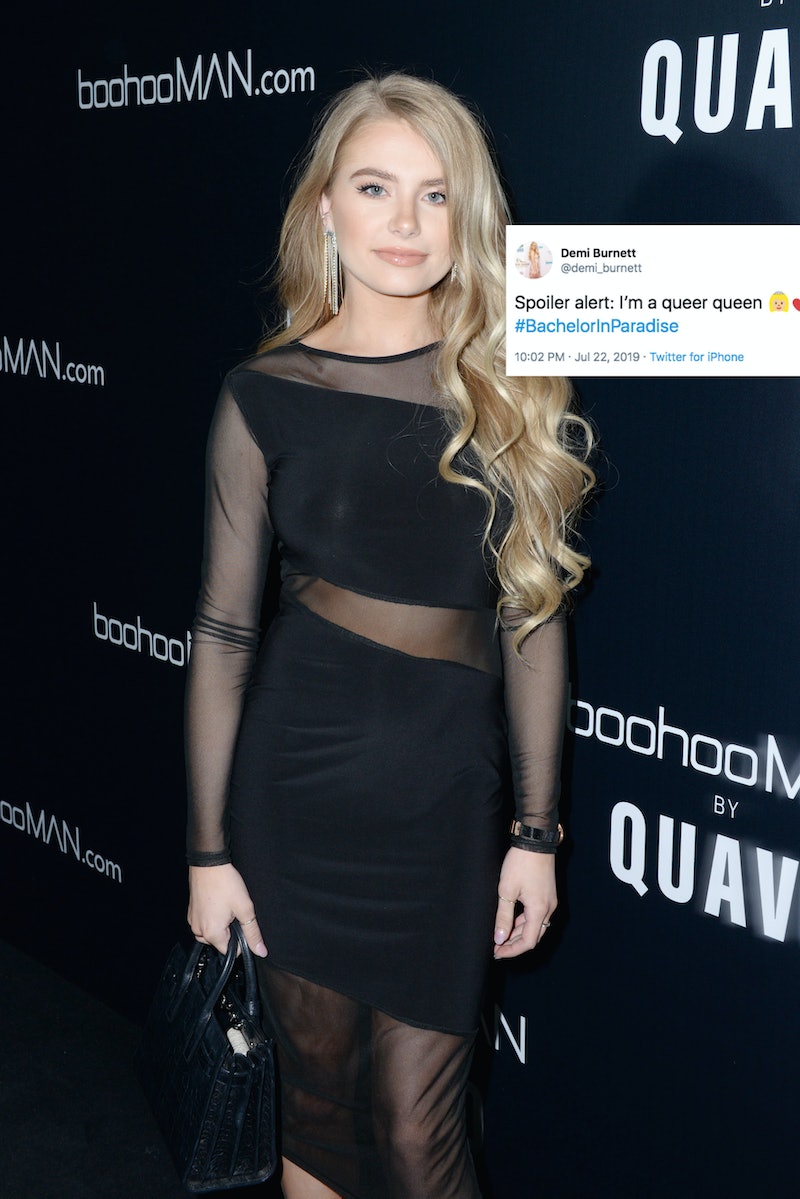 During Monday night's episode of Men Tell All, a new promo for Bachelor in Paradise aired, featuring one of the women from Colton Underwood's season of The Bachelor talking about her feelings for another woman. And now, she's speaking out. Demi called herself a "queer queen" in a tweet after the BiP trailer premiered, and she's already getting so much support from her fellow Bachelor Nation stars.

"I just know that I love this girl," Demi says in the promo, along with a clip of her and a woman making out on a bed. "I'm just so happy that I found her, and I can definitely picture being with her for the rest of my life."

Unfortunately, it doesn't seem like it's all magical, because this is paradise, and it never is. Later in the promo, Demi can be seen crying — but so can everyone else, so that doesn't necessarily mean that she and this mystery woman won't live happily ever after. But despite whatever drama may go down this season, it seems like Demi's happy to have this part of her life out in the open, and she's celebrating on Twitter. "Spoiler alert: I'm a queer queen," she tweeted.

It didn't take long for people to start letting Demi know that she has their support — including plenty of the women who she met on Colton's season.

Hannah, who's been close with Demi since they filmed the show, tweeted, "and we all, bow down. i love you always and forever."

Elyse also had a pretty solid response, even calling herself a cougar in the process — a funny callback to Demi's jokes about the older women on The Bachelor. She wrote:

"Spoiler alert... we love you, no matter who you love. Because love... is LOVE!!! Proud of you and proud of your truth and the courage to share that with the world!! And this Cougar will come at anyone who doesn’t show you graciousness for your bravery!!"

And the exchange that followed was pretty adorable, too:

Other women from Colton's season also chimed in, including Katie, Onyeka, and Kirpa:

And other Bach alum, including Haley Ferguson, Evan Bass, and Kristina Schulman, did, too.

Later, Demi shared another tweet referencing her sexuality when she replied to a fan who shared screenshots from the BiP promo where she was talking to the cameras. And as always, her response was sass on another level — exactly what fans have come to expect from her.

"Holy hell my top lip must still be in the closet," Demi tweeted.

There's no doubt that Demi will have plenty of entertaining commentary like this to share on BiP, which is a good thing, because there are so many questions that have yet to be answered. Who is this woman? Do they end up together? Is there a proposal in Demi's future?

With only two weeks to go 'til BiP, all our questions will be answered soon. But for now, it's great to see that Demi can be open about who she is, and the amount of support she's already receiving from fans and fellow Bachelor stars alike is pretty incredible.