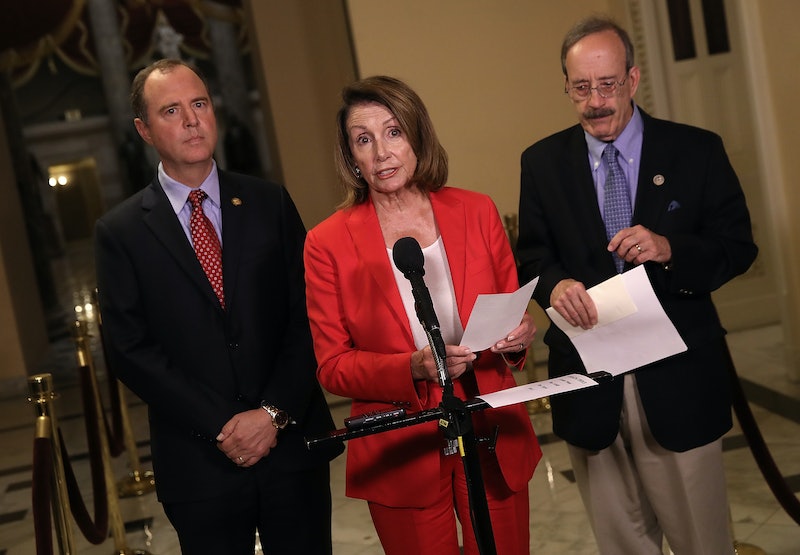 Not only would Nancy Pelosi take the gavel on the House floor if Democrats win a majority in November, but women would be grabbing the gavel from male counterparts up and down House committees and subcommittees — reaching historic numbers. A new report from The Hill shows that 35 women will be leaders in the House if the Democrats win, and here's how that will happen.

Plenty of reports have looked at the wave of women set to run and potentially win this fall for the first time. But this second historic first is not inherently part of the same development. This new report points to the fact that on many committees and subcommittees, the top-ranking Democrat is, or will likely be, a woman in the next Congress.

Long-serving women representatives like Reps. Maxine Waters and Carolyn Maloney would control committees like Financial Services and the Joint Economic Committee, respectively. Rep. Nita Lowey would control one of the most powerful committees in Congress, the Appropriations committee.

All of this is decided through seniority, as would-be Speaker Pelosi has long respected the tradition that the most-senior lawmaker on a committee leads it, and that's not expected to change. Thus it's these women's longevity in politics and legislation that is advancing them to the top tiers of Congress, not internal party elections.

"It is absolutely vital that women leaders take their rightful seat at the table: at the head of the table," Pelosi told The Hill, echoing many of her statements over the years supporting women in positions of leadership — particularly herself.

Last fall, when asked by The Boston Globe about whether she would keep her position as speaker should Democrats win again, she said it was important so that there was a woman leader in government.

"It’s important that it not be five white guys at the table, no offense,” Pelosi told The Boston Globe. She referenced the top two leadership positions in both the House and Senate, as well as the president. “I have no intention of walking away from that table.”

No matter what happens in the fall, four of those five spots will likely remain men. In the next tier of leadership, however, at the committee and sub-committee level in the House, the number would expand in large numbers were the Democrats to win. The Hill report points to the current GOP leadership having just about a third as many women as the Democrats.

As recently as 2012, the Republicans first appointed all men as their committee leaders and only after coming under heat added a woman to the group. Currently, there are three women leading House committees and nine leading sub-committees. If the estimate of 35, as The Hill report suggests, is correct, that would be an increase of nearly 200 percent.

Women have historically not only faired poorly in leadership on committees and sub-committees in the House but also in party leadership, where votes are more political. Currently, all such leaders are in the Democrats' caucus, except for Rep. Cathy McMorris Rodgers, the chair of the Republicans' caucus. Democrats in comparison have seven, including Leader Pelosi.

The November election and Democratic women's growing seniority may just shake things up even further, giving women the gavel.