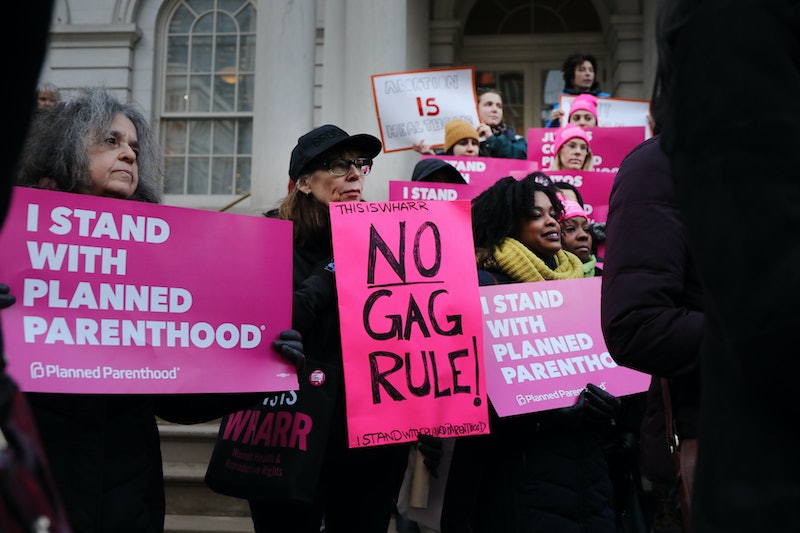 Through both policies and rhetoric, the Trump administration has made clear that it would like to limit access to abortion care in the United States. Now, Democrats are fighting Trump's Title X abortion rule with spending bill provisions that draw a clear line. In a press call on Monday, House Democrats reaffirmed that they plan to protect Title X funding, even as the White House moves to limit access to the program.

"Title X is a bipartisan program," Leana Wen, president of Planned Parenthood, tells Bustle during a press call on Monday, which was hosted by Planned Parenthood Action Fund and included several lawmakers and abortion rights advocates. "This is a policy with bipartisan support."

A new Trump administration rule bars Title X funding from going toward groups that perform abortions or provide abortion referrals. On Monday, a group of Democrats on the House Labor, Health and Human Services, and Education Appropriations Subcommittee said they won't pay for it, according to The Daily Beast.

Democratic lawmakers on the committee, including Reps. Lois Frankel, Rosa DeLauro, and Bonnie Watson Coleman, said they will only back federal family planning initiatives that pay for Title X the same way that the program has always been run, per the Beast. They included such provisions in their proposed annual Labor-HHS Appropriations Act, which was released on Monday. They did not say what they would do if the new version of the bill was shot down in the Senate.

The new Title X rule was slated to go into effect on May 3, according to NPR. However, it is currently under a temporary injunction. Although the rule's fate is not yet certain, its opponents have long cast the move as a domestic gag rule.

"Again and again, we've seen the public make clear that they want lawmakers to protect and expand their access to care, and not take it away," Wen tells Bustle in a press call. "So members of Congress, no matter the party, they know what's on the line. If the gag rule takes effect, it will be devastating for people across the country, including [Republican lawmakers'] constituents."

Wen adds that she believed there was "deep support ... for Title X among the medical community and the general public."

Title X monies pay cover health care services for about 4 million people, according to the Guttmacher Institute. Approximately 41 percent of those people receive care at Planned Parenthood. And, it's important to note that, because of the Hyde Amendment, Title X funding does not pay for abortions. Instead, Title X pays for things like STI testing and contraception coverage.

If the rule goes into place, it stands to impact some of the country's most vulnerable populations. About two-thirds of people who receive care through Title X are at or below the federal poverty level, according to the Guttmacher Institute. And, on top of that, the institute reports, about six in 10 women who use federal dollars to pay for contraception, do so through Title X-backed health care providers. Opponents to the current Title X changes have repeatedly underscored these facts.

"And that's why we will be fighting together with our champions in Congress and our partners all across the country," Wen says. "To make sure that people know about the harm of the Title X gag rule, and how much support there is all around this country for increased access to health care."