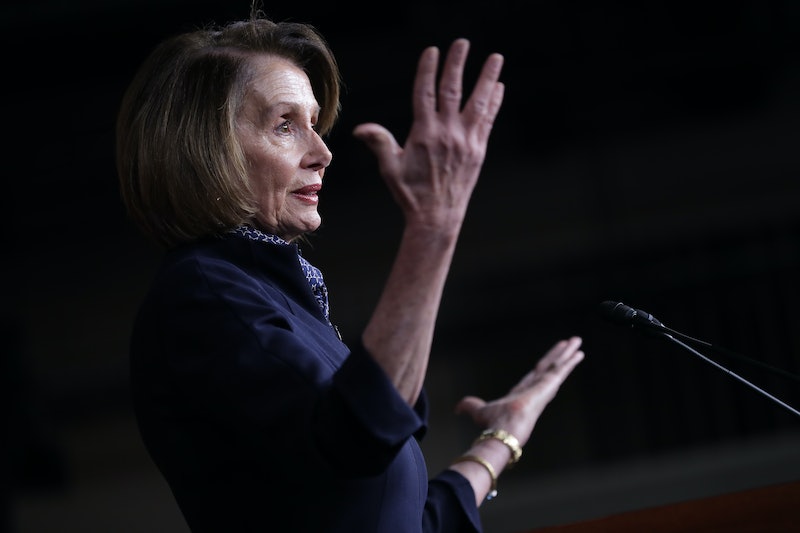 10 days after the government reached a stalemate on border wall negotiations, the Democrats' new plan to end the government shutdown has been announced. The proposed bill, which was described in a joint statement by Pelosi and Schumer, entails a bipartisan package of six Senate spending bills, including a stopgap measure to fund the Department of Homeland Security at its current level of funding through the first week of February. But there's one telling detail in the bills' description: it doesn't give in to Trump's demand of $5 billion in border wall funding.

In the full statement released by Pelosi and Schumer on Twitter, the senators wrote in part,

While President Trump drags the nation into Week Two of the Trump Shutdown and sits in the White House and tweets, without offering any plan that can pass both chambers of Congress, Democrats are taking action to lead our country out of this mess. This legislation reopens government services, ensures workers get the paychecks they've earned and restores certainty to the lives of the American people.

Per the joint statement, the proposed legislation will actively reopen all government agencies excluding the DHS. For the DHS, it will provide nothing more than a stopgap as a means for the bill to "not take a position on the President's wall." As a result, it would only offer $1.3 billion in border wall funding.

The bills come at a time when the House of Representatives is undergoing a shift in power, from a Republican to a Democratic majority in the new year. And though the influx of Democrats into the House will certainly impact political measures moving forward, it won't necessarily guarantee that Schumer and Pelosi's plan ends the shutdown.

After all, Trump has not indicated any interest in compromising on border wall funding. In fact, Trump seemed to directly address the legislation on Monday evening, writing on Twitter, "The Democrats will probably submit a Bill, being cute as always, which gives everything away but gives NOTHING to Border Security, namely the Wall."

Trump continued, "You see, without the Wall there can be no Border Security - the Tech 'stuff' is just, by comparison, meaningless bells & whistles."

Within their joint statement, Schumer and Pelosi argued that any GOP senators who oppose this proposed bill will be "complicit with President Trump in continuing the Trump shutdown and holding the health and safety of the American people and workers' paychecks hostage over the wall." This is because the Senate voted unanimously in favor of another stopgap measure in the days leading up to the shutdown earlier in December.

The Democratic leaders wrote, "It would be the height of irresponsibility and political cynicism for Senate Republicans to now reject the same legislation they have already supported."

Still, Trump has remained steadfast on his belief in the necessity of a border wall throughout the last week, amidst the shutdown. He has tweeted about it on multiple occasions, writing on Dec. 28, "We will be forced to close the Southern Border entirely if the Obstructionist Democrats do not give us the money to finish the Wall & also change the ridiculous immigration laws that our Country is saddled with."