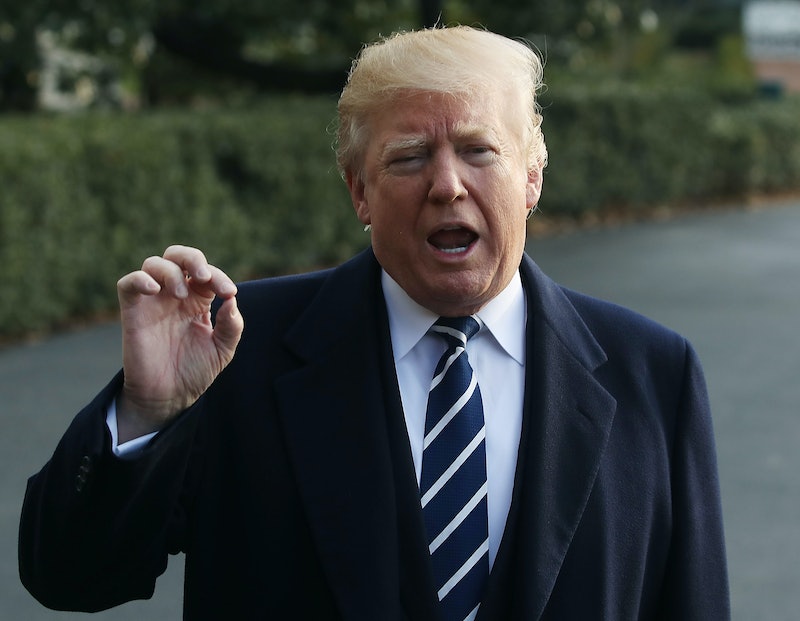 Following the narrow passage of the Republican tax bill in the Senate, President Trump supported Roy Moore using Democrats' opposition to the legislation in a Monday morning tweet. The president was initially hesitant to endorse Moore, whose bid for Alabama's open seat in the U.S. Senate has been plagued by allegations of child molestation and sexual assault. However, Trump recently became much more vocal, repeating Moore's denials of sexual misconduct, questioning the motive of Moore's accusers, and tweeting his support for the congressional candidate.

"Democrats refusal to give even one vote for massive Tax Cuts is why we need Republican Roy Moore to win in Alabama," Trump tweeted. He went on to list issues he believes need Moore's vote, including illegal immigration, the proposed border wall, the military, reproductive rights, and guns. He also called Moore's Democratic opponent, Doug Jones, "a Pelosi/Schumer puppet."

Recent polls show Moore and Jones neck and neck one week out from the Dec. 12 special election. After Moore was first accused of inappropriate sexual behavior toward teenagers while in his 30s, almost 40 percent of Alabama evangelicals said they were more likely to vote for him. Nevertheless, Jones' support grew among non-evangelical voters, threatening Moore's position as the candidate favored to win.

Trump congratulated Moore on winning the Republican primary in September, even though he had voiced support for his opponent, Luther Strange (he deleted those tweets after Moore's victory). Despite his previous tweets about Moore, though, Monday's post was his strongest endorsement yet.

He usually skirted an official endorsement by focusing on Jones rather than Moore, tweeting in November: "The last thing we need in Alabama and the U.S. Senate is a Schumer/Pelosi puppet who is WEAK on Crime, WEAK on the border, Bad for our Military and our great Vets, Bad for our 2nd Amendment, AND WANTS TO RAISES TAXES TO THE SKY." Trump added: "Jones would be a disaster."

Trump repeated similar sentiments Monday morning in a second tweet, reiterating his "puppet" nickname for Jones, along with his belief that Jones "would hurt our great Republican Agenda of low on taxes."

Senate Republicans passed Trump's tax code overhaul Saturday by a 51-49 vote. Democrats unanimously opposed the legislation, while every Republican but Bob Corker voted in support. President Trump praised GOP lawmakers for pushing through his first major legislative victory, and House Speaker Paul Ryan promised Congress would work quickly to put the bill on the president's desk to be signed into law.

Although Trump continues to call the new tax legislation "tax cuts," many Democrats asked: Tax cuts for who? Almost 50 percent of the cuts would benefit America's wealthiest 5 percent in the first year, according to a Tax Policy Center report. By 2027, taxes would rise for 50 percent of all taxpayers, including low-income Americans.

The bill was also criticized for removing penalties for Americans without health insurance, which would cause premiums to rise for those who need it, preventing public schools from claiming deductions, and capping property tax deductions. While the Senate version is better for teachers and college students, the details must now be ironed out before a final bill becomes law.

Nevertheless, Trump used his tax victory as an opportunity to escalate his support for Moore, telling voters why they should vote for the Republican candidate next week. After nine women accused Moore of sexual assault or making sexual advances toward them when they were teens, Republican leaders said Moore should drop out of the race. Trump, on the other hand, told reporters: "He totally denies it. He says it didn't happen. And look, you have to look at him also."