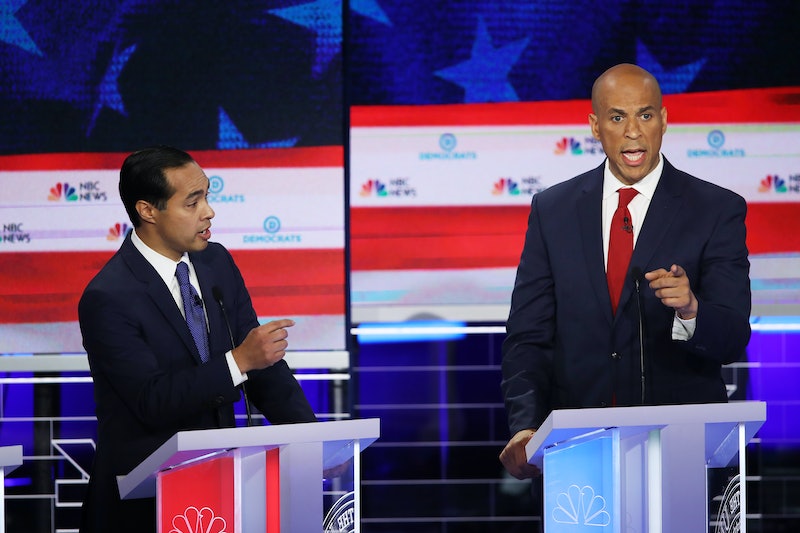 The long fight for recognition and visibility of one of America's most marginalized communities saw a victory in the first Democratic debate on Wednesday night. Sen. Cory Booker and former Housing and Urban Development secretary Julián Castro both brought up transgender rights issues in the June 26 debate, and to some, the mere fact that transgender rights came up at the Democratic debate merits a celebration — but according to other activists, none of the candidates addressed the matter in a truly comprehensive way.

These mentions were "the result of decades of labor from trans advocates, particularly women of color, in pushing the struggles of our community to the forefront," Charlotte Clymer of the Human Rights Campaign tells Bustle. According to The New York Times, they were actually the first time a candidate for office had brought up trans rights at a national debate.

Gillian Branstetter, spokesperson for the National Center for Transgender Equality Action Fund, sees it as "a monumental development" in the primary race.

"It’s really a huge sign of how far not just the movement has come, but the nation has come," Branstetter tells Bustle. "Transgender people have really faced a crisis of inequality for years and years, and many have lived their entire lives waiting to see their nation’s leaders address that crisis. And now they’re seeing it. That’s fantastic."

But for Dr. Lourdes Ashley Hunter, executive director of the Trans Women of Color Collective, Castro's and Booker's statements were too shallow — and in Castro's case, factually incorrect — to warrant the celebration they've been getting from some corners.

"I don’t think there was a discussion of trans issues or trans rights," she tells Bustle. "I think that there was messaging used to pander to LGBTQ communities."

During the debate, Castro mentioned the transgender community in the context of reproductive justice. He specifically mentioned trans women, where he likely meant to refer to trans men and nonbinary people.

"I believe in reproductive justice, and what that means is just because a woman — or, let’s not forget someone in the trans community, a trans female — is poor doesn’t mean they shouldn’t have the right to exercise the right to choose," he said.

Later, Booker brought up violence against transgender Americans, and the murders of black transgender women in particular.

The debate "showed me and the transgender community which candidates really know and understand our community and those who pay lip service to it because it is politically expedient," says Alaina Kupec, board co-chair for the Transgender Legal Defense and Education Fund.

"Senator Booker showed his in-depth knowledge and the crisis that transgender women of color, especially black, face in their struggle for survival every day," Kupec adds. "Conversely, Julian Castro doesn't appear to know the difference between a trans man and trans woman."

Basil Soper, producer and executive director of multimedia documentary project Transilient, tells Bustle that the candidates' mentions of trans rights without serious discussion of how to address the problems that trans people face every day amounted to a "tokenizing" conversation.

"For years, liberal LGBT folks do a whole lot of talking about trans women of color and the violence they face, but nobody has come up with a serious plan on how to take this action head on," Soper says. "Trans women of color need to be liberated on their own terms and we as a nation need to figure out how to support those terms."

The way to do this, according to both Hunter and Soper, is to actually involve trans women of color in crafting policy.

"What’s really important is for the candidates to actually reach out to trans communities and ask them what is important to them," Hunter says. "Not just affluent wealthy white trans community members, but also those who are struggling in poverty, who are undocumented, trans women and particularly black trans women, whose lives are in danger every single day, who are at risk of being murdered simply for existing."

Regardless of how the mentions of trans rights were received, the first Democratic debate offered these issues something they rarely get in the national media: visibility.

"At a time when trans and non-binary people are under unprecedented attacks by the federal government under [President] Trump and [Vice President] Pence, when 11 black trans women have been killed this year in an epidemic of anti-trans violence, that visibility is more critical than ever," Clymer says. "Progress is often messy, but last night, for the first time in a long time, I genuinely felt hope for the future."