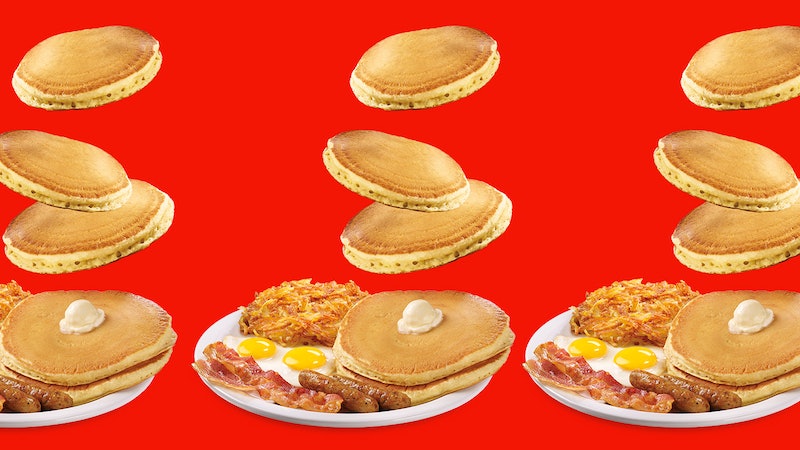 If only for a limited time, Denny’s new Super Duper Slam meal is here to reign over your 2020 breakfasts. Denny’s is no stranger to changing up its offerings. In the past year alone, it's upgraded its menu with items like the limited-time Denny’s Pancake Puppies and Orange Dreamsicle drink. Now, the chain is adding an endless pancake deal that costs about the same price as an oat milk latte.

For only $6.99 at participating locations, you can get Denny’s new Super Duper Slam which includes pretty much all the makings of a perfect breakfast. For less than $7, you’ll get two eggs made any way you like, two strips of bacon, two sausage links, and crispy hashbrowns. Oh, and all-you-can-eat buttermilk pancakes. It is the breakfast meal your hangover dreams are made of.

The new Super Duper Slam comes after the success of its slam predecessor, the Sumer Slam Meal. Last summer, Denny’s brought back their $5.99 Super Slam meal which included two eggs, two bacon strips, two sausage links, crispy hash browns, and two pancakes. For just a dollar more, the “Duper” part of the Super Duper Slam gets you endless pancakes. Whether you see “all you can eat” as a gift or a challenge is entirely up to you.

"When we launched the Super Slam we thought we had taken our signature Grand Slam to the limits, but at Denny’s we’re always asking ourselves how we can give our guests even more for less,” John Dillon, chief brand officer for Denny’s, said in an emailed press release. “To kick off 2020 and take the Super Slam to never before reached heights, we decided to combine two of our favorite deals – All You Can Eat Pancakes and Super Slam – to give guests the endless (pancakes) value and delicious dining experience that the Super Duper Slam delivers.” Never before reached heights! Build yourself a monument of fluffy buttermilk cakes. Climb that stack of endless pancakes to the moon, my friends. The sky and your stomach are the limits.

Denny’s new Super Duper Slam, as specified in the press release, is unsurprisingly only available as a dine-in option. This isn’t some 7-Eleven Bring Your Own Cup Slurpee Day where you can walk into a Denny’s with a moving box and ask for “endless pancakes to go, please.” Your limitless pancakes will be limited to what you can eat at your local restaurant.

However, Denny’s is open 24/7. So you could, in theory, get a booth in the morning and stay until dinner, feasting on endless pancakes and the concerned stares of Denny’s employees. While cost-effective and technically allowed, it perhaps isn’t the recommended way to enjoy the new Super Duper Slam meal.

Starting Wednesday, Jan. 8, 2020, Denny’s new Super Duper Slam meal is available at participating locations nationwide. A blessed pancaking to you and yours.