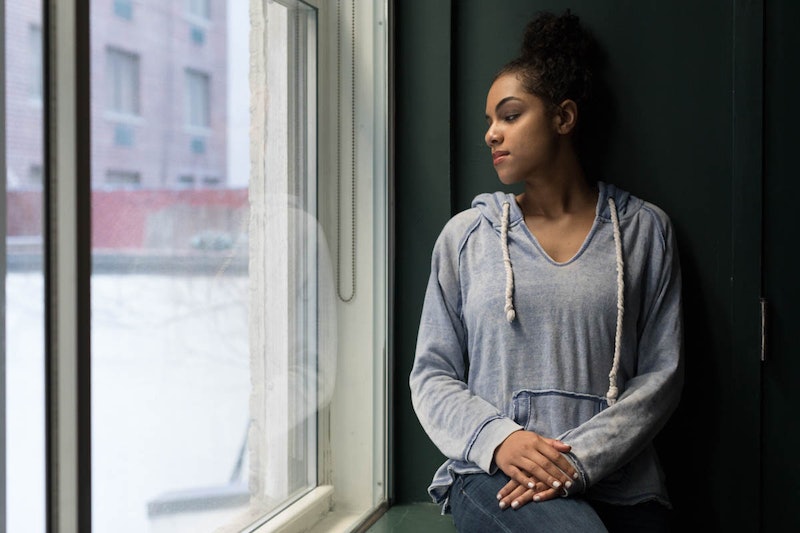 It's no secret that many mental health conditions are tied with physical health conditions — though, it should be mentioned that mental health is physical health, too. According to new research, depression and anxiety are linked with autoimmune thyroiditis, a condition that occurs when the body's immune system begins to attack the thyroid, a hormone-regulating gland. The condition is also called Hashimoto's Thyroiditis, and affects around 10 percent of Americans, according to the Mayo Clinic.

“Over the years, I must have been consulted by several hundred people suffering from depression and anxiety," Dr. Teja Wolfgang Gromer, the lead study author, said in a recent press release. "At the end of 2015, I noticed a marked connection between AIT and the two other conditions, especially in patients suffering from both.”

Dr. Gromer went on to say that since half of those patients diagnosed with depression and anxiety also tested positive for thyroid antibodies, he decided to investigate the potential connection further. In a meta-analysis, the team found that people with autoimmune thyroiditis tend to fall within the age range of 30 to 50, with women being affected at a far greater rate than men usually are. Symptoms are often mistaken for depression or anxiety alone, or get dismissed as menopausal symptoms. In addition to a disruption in the body’s energy levels leading to chronic exhaustion, autoimmune thyroiditis and other thyroid disturbances also contribute to psychological symptoms like anxiety and depression, which is similar to the experiences of people who live with other autoimmune diseases. Dr. Gromer said in a press release that, after receiving a diagnosis of autoimmune thyroiditis, “most patients felt a sense of relief [...] as very often they had been left with no explanation of their symptoms.”

Scientists at the Friedrich-Alexander-Universitat Erlangen-Nurnberg, where the study was conducted, are hopeful that new research findings could help a lot of people struggling with these disorders, especially women. As common as depression and anxiety are on a global scale — more than 260,000 people were admitted to hospitals for treatment in Germany in 2016 alone, according to Germany’s Federal Statistics Office — this study’s findings are potentially profound.

Autoimmune thyroiditis can be treated with medication, according to WebMD, but understanding how these conditions are interlinked is a crucial step to a holistic understanding of how to treat each of them effectively. But beyond that, these findings underscore how interconnected mental and physical health truly are.