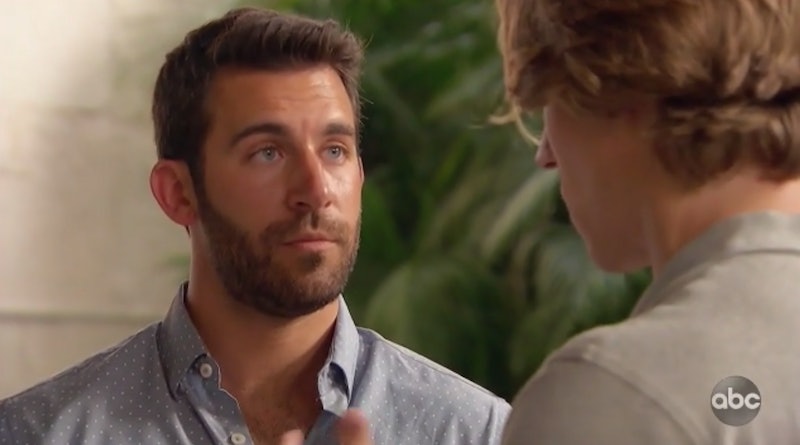 Bachelor In Paradise can bring all kinds of unexpected surprises, but no one really saw Derek and John Paul Jones' fight coming. At the cocktail hour following Chris and Krystal's wedding, JPJ decided it was a good time to confront Derek about his intentions with Tayshia. He accused him of going on the show for fame and hooking up with his fans, both claims Derek insisted were false. But considering the whole thing came so out of nowhere, everyone was confused — and for more than one reason.

First of all, the fight was totally random. In the middle of someone's wedding day probably wasn't the ideal time for JPJ to angrily confront Derek, but he did. And he wasn't quiet about it either — heads turned quickly, Tayshia broke into tears, and everyone looked over, mouths agape.

After pulling him aside, JPJ immediately started berating Derek. He called him a "Bachelor Nation groupie" who wasn't looking to settle down with someone like he was, and Derek just stared back at him perplexed. JPJ also didn't let Derek get a word in edgewise; every time he tried to interject and defend himself, JPJ just repeated Derek's name and told him not to insult his intelligence.

He went on to call Derek a fraud who just "needs drama for his podcast," claiming that's why Derek came to Paradise in the first place. JPJ pointed to the fact that when they first arrived in Mexico, Derek supposedly invited him to come on the podcast after filming wrapped, but considering Derek didn't get a chance to respond, it's unclear what really happened.

JPJ claimed to initiate the fight in defense of Tayshia, saying that she deserves more than someone like Derek. He also told Derek that he planned to let her know the type of man he believed him to be. Tayshia has yet to comment on the matter, but it's worth noting that she's perfectly capable of making that judgement call on her own.

Even all of the beach-goers were surprised by JPJ's outburst, because it was totally out of character for him. Usually, he's a relatively laid-back dude who isn't upset by much.

After the wedding, Derek attempted to talk to JPJ back on the beach, but JPJ wasn't having it. He just kept cutting Derek off, saying, "Nope," repeatedly. And finally, before walking away, he told Derek not to talk to him again. If Derek follows through with that, it's going to be a long summer for both of them.