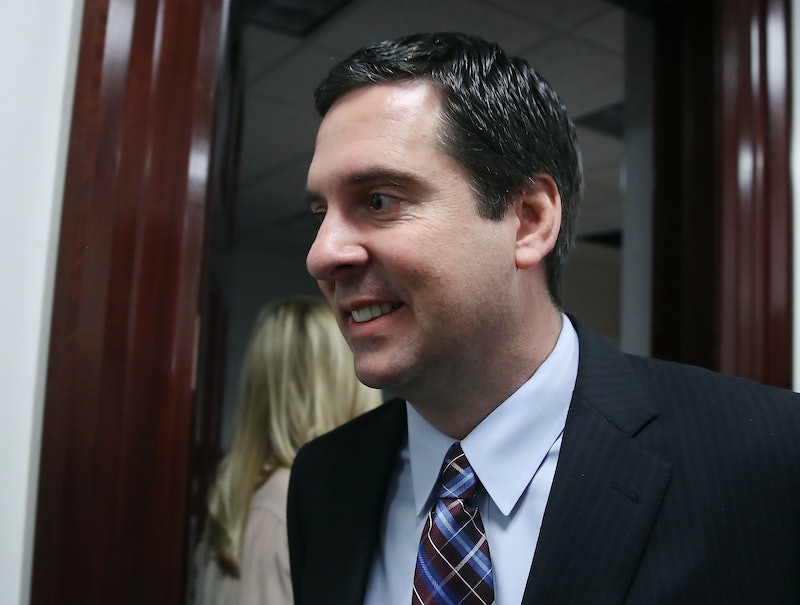 On Thursday, Chairman of the House Permanent Select Committee on Intelligence Devin Nunes recused himself from the Russian election probe. This comes in reaction to the House Ethics Committee opening an investigation into Nunes, for possibly revealing classified intelligence information to the president. Nunes' statement on his recusal calls the ethics accusations "entirely false and politically motivated" and blames them on "leftwing activist groups."

Nunes' recusal caps off a tumultuous two weeks for the House's probe into Russian interference with the election. Nunes has taken flak not only from Democrats but from national security experts and even some Republicans, for his handling of the Russia probe after he briefed the president and spoke to the media about intelligence findings before discussing it with the rest of the Intelligence Committee. That is considered a major breach of protocol for a committee that typically prides itself on its bipartisan, measured approach. The saga took a turn as reporting from the New York Times revealed that Nunes had gotten the intelligence from White House staffers — which was in direct contradiction with statements Nunes had previously made to Bloomberg's Eli Lake.

In a March 22 press conference, Nunes claimed to have seen documents that suggested improper unmasking of Trump transition officials caught up in legal surveillance in the time between Trump's election and inauguration. Normally, when intelligence agencies legally surveilling foreign targets pick up U.S. persons, the identities of these Americans are hidden (masked) in intelligence reports. Top ranking intelligence officials have clearance to "unmask" those Americans if it is necessary for national security. According to Nunes, members of the Trump transition team were improperly unmasked by Obama administration officials, allowing for monitoring of political opponents and leading to leaks of classified information during the early days of the Trump administration.

This was taken as vindication by the president for his claims that President Obama had wiretapped Trump Tower during the election, despite Nunes himself (in addition to top officials for the FBI and NSA) denying that charge.

Recently, the Senate Intelligence Committee has gone out of its way to display bipartisanship support on its own Russia investigation after the House broke down into squabbles. With a recent Quinnipiac University poll showing 66 percent of Americans wanting an independent investigation of Russian meddling in the 2016 election, projecting that kind of calm and fair approach may be crucial to retaining the public's trust.