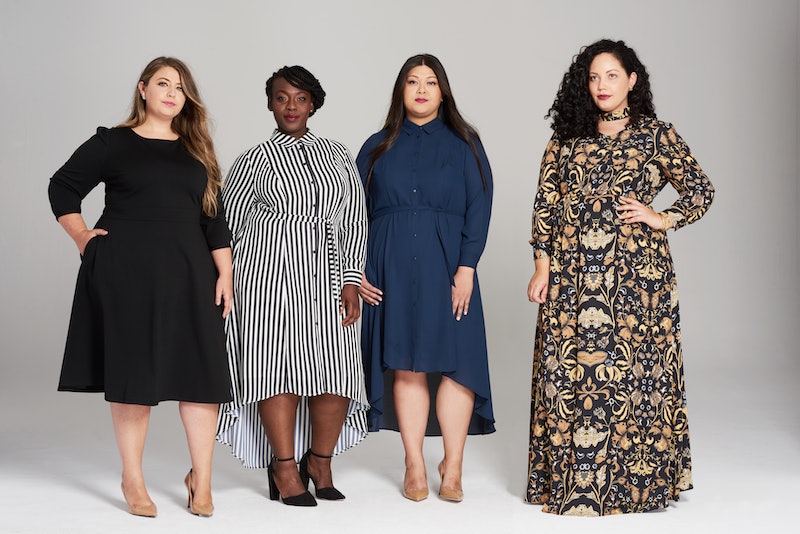 Personal styling subscription box company Dia&Co kicked off 2017 with the announcement of its #movefashionforward campaign, an open call offering financial and practical support to designers who want to create clothes for plus size women. Now, just six months later, Dia&Co is set to debut the first #movefashionforward collection, designed by fashion blogger Tanesha Awasthi, at theCURVYcon on Sept. 8.

Awasthi, who founded the style blog Girl With Curves in 2011 and has since grown the site to a full-time business for herself and her husband, tells Bustle that as soon as she saw the February #movefashionforward spread in The New York Times, she was "on board immediately."

The official, exclusive Girl With Curves line, which Dia&Co founder and CEO Nadia Boujarwah says is quintessential Awasthi — aka sleek, sophisticated, and reflective of her strong, unapologetic design voice — is comprised of 11 looks and will be available in a special edition of Dia&Co's subscription box.

Folks eager to snag the looks can sign up for the special edition box's waitlist beginning Sept. 6; boxes will begin shipping Sept. 18. Boujarwah explains that like all other Dia&Co boxes, the Girl With Curves box will be tailored by a personal stylist to each client's size and preferences, and may contain clothing items from other lines, but will prominently feature Awasthi's designs.

Awasthi says the #movefashionforward campaign embodies progress toward more diverse and inclusive plus size fashion, and that the opportunity to design clothes in partnership with Dia&Co was a chance to fill a gap in plus size clothing. "There's a lack of a certain aesthetic in plus size fashion...a big need for sophisticated, chic, contemporary clothing," she says, adding that the feel of most plus size clothes she sees is either "super junior" or very matronly.

The Dia&Co x Girl With Curves partnership is not Awasthi's first shot at designing. She designed a tutu skirt, which she brought out in November 2013 and sold out of three times; the skirt was made in San Francisco, and all the production work was done by Awasthi and her husband.

After the success of the skirt, she knew she wanted to do a full collection, so in fall 2014, she launched a line with more than 20 pieces. "It was very body-conscious," she says. "Back then I was very into tight pencil skirts and crop tops."

Like her tutu skirt, that collection sold out practically overnight. Awasthi had hired a few freelancers to help her keep up with demand, but the sheer amount of time-consuming labor that went into getting the collection to her enthusiastic customers made her realize: She wouldn't be able to design more clothes without serious help producing, marketing, and shipping them.

"As much as people wanted another collection, I just couldn't do it," she says. "So I had to put the design stuff on hold for when the right partner came along and it wasn't just me."

The right partner turned out to be Dia&Co. "Gosh, [producing the collection] was like—such a process, but at the same time, it feels like it went super fast," Awasthi says. "We're all so passionate about what we do. I came to the table with so many ideas, and they came to the table knowing who their core customer is."

Like all collaborations, theirs involved a little back-and-forth, Awasthi says. She prides herself on making clothes that are "body friendly for every body." "When I design, I'm just designing for women, and I'm designing amazing clothes that will look great on everybody," she explains. "Dia has their extensive [plus size] styling, which I completely respect. And with my collection, it was almost like, if we take a step back, I'm creating a collection that looks good on everyone."

She adds, "[With] a few pieces, [the design team] was really hesitant, but I was like, 'Look, this is gonna be amazing, you have to trust me.' My readers, they are the fashion-forward girls. They want these pieces, and can't find them."

A Dia&Co rep tells Bustle that if inventory allows, Awasthi's Girl With Curves line will be available in Dia&Co's regular boxes in the future, but priority will go to folks waitlisted for the special edition box.

As for Awasthi's future, she says she would love to design more clothes with Dia&Co, and says she's eagerly anticipating clients' reactions to this collection. "I'm excited, nervous, all the above," she says. "I'm hoping that everyone loves it."

To sign up for Dia&Co's Girl With Curves box, go to the collection's landing page here. Boxes are available on a first-come, first-served basis, ship to the U.S. only, and cost $20 — Dia&Co's usual per-box styling fee. Girl With Curves items included in the box will be priced between $49 and $99 each.