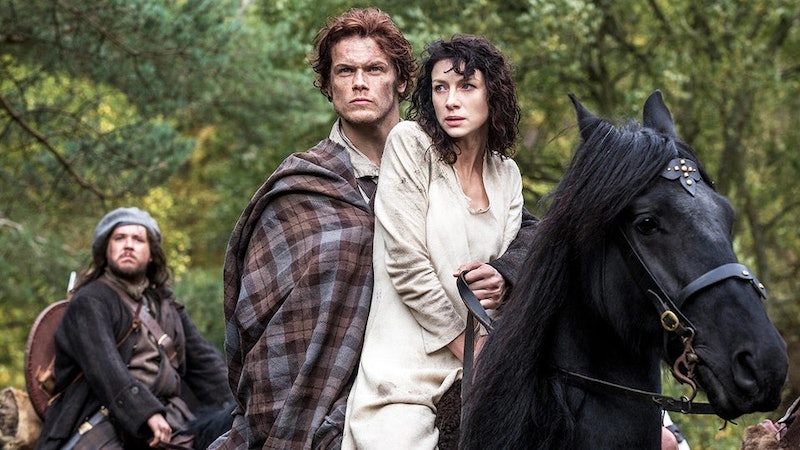 Diana Gabaldon's legions of devoted readers will be thrilled to hear that the Outlander author is writing a new Outlander book about the time-traveling Master Raymond's backstory, and it may even lead to a full spin-off series. Gabaldon's new book currently lacks both a title and a release date, but here's what we know so far.

Started in 1991 with Outlander — also known as Cross Stitch in the UK — Diana Gabaldon's historical fantasy series centers on Claire, a time traveler, who finds herself thrust backward, from the mid-20th century, into 18th century Scotland. There, Claire spends three years building a life with a young laird-in-the-making named Jamie Fraser, before returning, pregnant with Jamie's child, to the husband she left behind in her own time. The series follows Claire, her daughter, and a whole host of other characters as they navigate 18th-century politics, time travel, and love. Gabaldon is currently at work on the ninth book in the series, which will be titled Go Tell the Bees That I Am Gone.

Master Raymond first appears in Dragonfly in Amber, the second book in the Outlander series, which was released in 1992. Fans of Starz's Outlander TV adaptation will remember him as the apothecary who befriends Claire in Paris during the show's second season, only to disappear after he escapes execution in the episode titled "Faith."

Overall, Master Raymond is a relatively minor character, but he's also a time traveler, and just happens to be Claire's direct ancestor. Gabaldon writes on her website's FAQs section that Master Raymond "knows Claire, when he sees her, as one of his great-great, etc. grand-daughters," because of "the blue light about [her]." Gabaldon also uses Master Raymond's entry in her FAQs section to tease fans about a possible Outlander spin-off series:

Master Raymond should get his own series of books, eventually. So in fact, we’ll see Claire, Jamie, and Geillis again, then — but as secondary characters in Master Raymond’s story (you recall, Geillis mentions having met 'one other' (time-traveler) in Voyager, but doesn’t tell Claire who it is).

Heaven knows just when we’ll get to that — in about ten years, at this rate — but we will get to it.

Now, it seems, the time has finally come for Master Raymond, the millennia-old time time traveler, to get his own story. Gabaldon teased the opening lines of Master Raymond's book in Oct. 31, 2018, tweeting them out with the hashtag #NOitisntwrittenyet.

The fourth season finale of Starz's Outlander adaptation aired in January, and production on Outlander Season 5 began in April. The show has been renewed through its sixth season.

More like this
16 Novels That Paint A Realistic Portrait Of Abortion
By K.W. Colyard
'The Summer I Turned Pretty' Book Ending Is An Emotional Rollercoaster
By K.W. Colyard
Ottessa Moshfegh Is Happy To Be Your “It” Girl
By Arya Roshanian
10 Must-Read New Books Out This Week
By K.W. Colyard
Get Even More From Bustle — Sign Up For The Newsletter