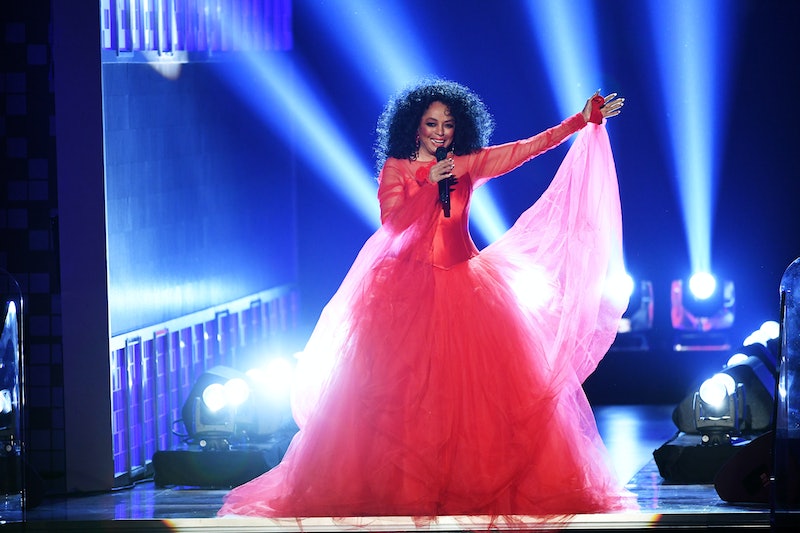 The Grammys made a pretty big deal out of Diana Ross' 75th birthday, crafting a tribute that included a video tracing the history of her career, a speech from her adorable nine-year-old grandson, and finally a show-stopping performance from Ross herself — but what the Grammys failed to mention is that her birthday isn't even this month. Ross doesn't actually turn 75 until Mar. 26, but celebrating her own birthday way ahead of schedule just feels appropriate for a living legend such as Ross.

The artist's performance featured her in a voluminous red dress, telling the audience, "When I was a little girl, I felt the joy of singing. It made me happy. It made my parents happy. And it led to this day. And it brings me joy through my life there has always been music and its power." Then she launched into a rendition of her classic song "The Best Years Of My Life." Ross stopped singing mid-performance to thank the audience for celebrating her birthday, and the audience went along with it because either they didn't know it wasn't actually her birthday or had the good sense to recognize that if Diana Ross tells you that you are celebrating her birthday today then you are going cancel your plans and you are going to celebrate her birthday today.

After the first song, the audience clearly thought that Ross' performance was over, but Ross informed all of them that they were mistaking her for an artist who wasn't celebrating her 75th birthday at the 2019 Grammys. "Hands in the air, move the energy in the room," she instructed the audience. It would not be the last time she would have to instruct the audience to keep the vibe going. "I can't see you," she said at one point, reminding the audience not to "be lazy" during her performance of "Reach Out and Touch (Somebody's Hand)".

During that song, she walked through the audience beckoning other to sing with her, including a clearly caught-off-guard (but game) Jaden Smith, before stepping onto a second stage and ending her performance by declaring "Happy Birthday to me! Happy Birthday to me!"

Ross was just one of several iconic women celebrated throughout the night, as her high-spirited self-tribute was preceded by a tribute to Dolly Parton and was succeeded by a post-humous tribute to Aretha Franklin.

While it may seem odd to be celebrating a birthday a month early, the reality of the situation is that the Grammys weren't likely to move back an entire month just so they could line up with Ross' huge milestone, and it was more important to celebrate her powerful legacy and give modern audiences a taste of her unifying and spiritual musical stylings. That's reason enough to celebrate the life's work of one of America's greatest living singers, who's been a crucial influence on music and pop culture over the last many decades. Anyway, everyone knows you get an entire month to celebrate your birthday; Ross was just kicking hers off a little early — on an international stage.