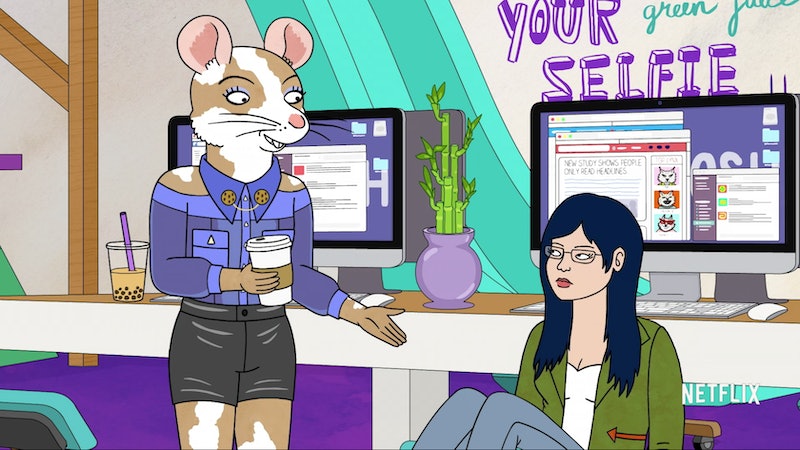 Netflix's BoJack Horseman doesn't pull any punches when making satirical jokes about Los Angeles and Hollywoo (the show's version of Hollywood). And in BoJack Horseman Season 4, which is now streaming, the comedy series tackles women's rights in the United States. (Spoilers are ahead for the new season.) In the fifth episode of Season 4, Bojack Horseman parodies how women's rights are often stifled by the U.S. government, and it's all too familiar.

The episode has several storylines that follow a rash of fictional mass shootings (committed by men) occurring in the United States. The show isn't necessarily taking a position on gun control, but is instead using the controversial topic to prove a point about women's rights in the United States. "It was less about the mass shootings per se and more about what it says about the stories that we tell and how we tell them," BoJack Horseman showrunner Raphael Bob-Waksberg told Slashfilm regarding the episode. "Should we take any responsibility for ourselves or are people adults who can make their own decisions? In what ways are we forwarding certain narratives that are not helpful?"

In one of the plotlines, Diane becomes a gun owner after visiting a shooting range and realizing that the firearm makes her finally feel protected and empowered against male harassment. "If you're a man, you're not going to get it," she writes in a thinkpiece for the fictional feminist website Girl Croosh. Diane continues:

"You still can't actually know what it feels like to constantly have your guard up in parking garages, walking the street, or even at work. I'm tired of helping men understand how it feels like to be a woman. Starting now, I'm doing what it takes to put the power in my own hands."

Later in the episode, everyone is shocked when a mass shooting is committed by a woman. Suddenly, their version of TV news is asking, "Can women be trusted with firearms?" and interviewing men who now feel unsafe. California Senator Morehouse announces a state congressional hearing dealing with women and guns, because "even one death from the bullet of a female gun owner is too many."

The state congressional hearing is filled with older, white men (and a moose) debating a woman's right to bear arms. In the hearing, Diane testifies:

"Maybe you shouldn't blame women...maybe you should blame the constant societal messaging that tells us we are safe only as long as the men around us allow us to be. So if you have a problem with women carrying firearms, you can roll up your sleeves and actually work to create a society where women feel safe and equal. Or you could just ban all guns."

The California senate then votes to ban guns in the Golden State. Diane states at the end of the episode: "I can't believe this country hates women more than it loves guns."

The storyline echoes current events in a very real way. Earlier this year, the American Health Care Act was passed by the House of Representatives — an act that would defund Planned Parenthood and make sexual assault and pregnancy "preexisting conditions." The 2017 Congress is made up of 80.4% men, according to Rutgers University's Center For American Women and Politics. Women have been elected to only 105 out of 535 total seats in the Senate and the House of Representatives.

While BoJack Horseman is funny comedy, this episode bluntly points out how the rights of American women are often determined by men — and how makes the battle for equality in the eye of the government an uphill one.

More like this
'The Capture' Is Finally Back – & S2 Looks Tense AF
By Sophie McEvoy and El Hunt
It’s Official: 'The Bachelorette' Is No Longer A Fairy Tale
By Samantha Allen
Jane Lynch Revealed Why She’s Leaving 'Funny Girl' After Lea Michele Was Cast
By Grace Wehniainen
On 'Industry,' Marisa Abela Takes Control
By Morgan Leigh Davies
Get Even More From Bustle — Sign Up For The Newsletter