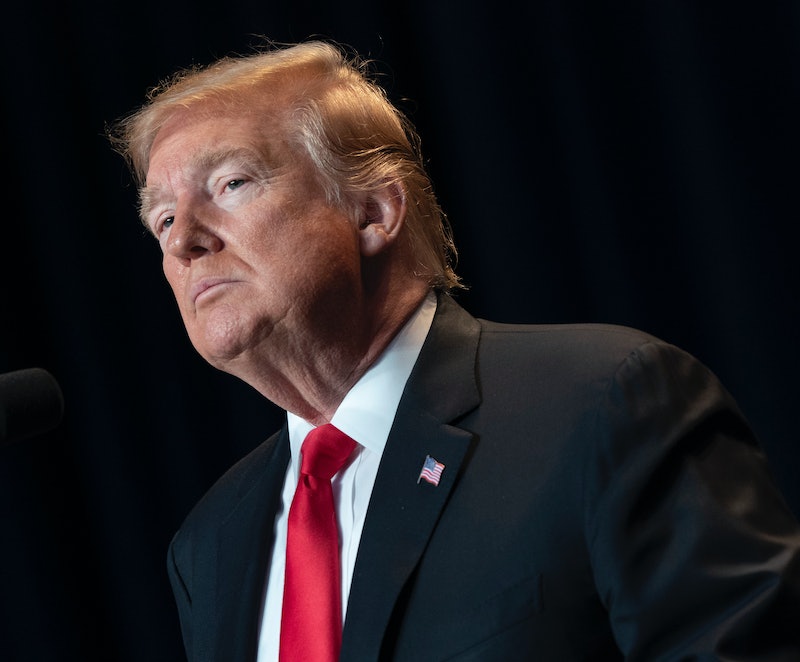 Social media took notice when President Donald Trump seemed to misspeak during a speech at the National Prayer Breakfast in Washington D.C. on Thursday. Even a dictionary joined the ridicule on Twitter: Dictionary.com mocked Trump's "abolition of civil rights" gaffe by offering its followers a definition of the word "abolition."

"Since the founding of our nation," Trump said Thursday, "many of our greatest strides — from gaining our independence, to abolition of civil rights, to extending the vote for women — have been led by people of faith." Trump presumably didn't mean to praise the idea of getting rid of civil rights; one commentator suggested that the teleprompter may have read "the abolition of slavery and civil rights." Trump often flubs his words, and The Washington Post's Cleve R. Wootson Jr. reports that the National Prayer Breakfast in particular has tended to be an "oratorical minefield" for the president.

People on Twitter were quick to make fun of Trump's blunder. One user suggested that his words were a Freudian slip; another referenced the often-quoted line from The Princess Bride, "I do not think it means what you think it means." But Dictionary.com's response may top them all: It tweeted out a simple definition for the word. "Abolition," the dictionary wrote. "The act of doing away with, putting an end to."

When a particular word dominates the news cycle, Dictionary.com and Merriam-Webster often use it as an educational opportunity. Dictionary.com made "complicit" its word of the year in 2017 after people took to using the term in reference to Ivanka Trump. Critics of the first daughter argue that she's falsely marketed herself as a defender of some liberal values but fails to act as a moderating influence in the White House, rendering herself "complicit" in her father's actions.

When Saturday Night Live made fun of the first daughter with a satirical perfume ad for a brand called "Complicit," she was apparently deeply bothered by it, as former White House aide Omarosa Manigault suggested in her book Unhinged.

"I don't know what it means to be complicit," Ivanka told CBS in an interview shortly after the fact. "If being complicit is wanting to be a force for good and to make a positive impact, then I'm complicit." Both Dictionary.com and Merriam-Webster reported that searches for the word "complicit" were trending after her remarks.

The online dictionaries have taken many other opportunities to comment on word usage during the Trump era. Merriam-Webster defined "fact" after Kellyanne Conway used the term "alternative facts" and "hombre" after Trump used the term "bad hombres" in a 2016 general election debate. Dictionary.com made "misinformation" its 2018 word of the year in response to a "recent explosion of misinformation," including fake news.

Lauren Naturale, head of Merriam-Webster's social media operations, explained the rationale for publicizing this information to Motto in 2017. "We are reporting that a certain public figure's use of language provoked the curiosity of many Americans, and sent them to the dictionary for information about the nuances of spelling, meaning or usage," she said. "Trump is the subject of enormous interest and news attention, and our data reflects that."