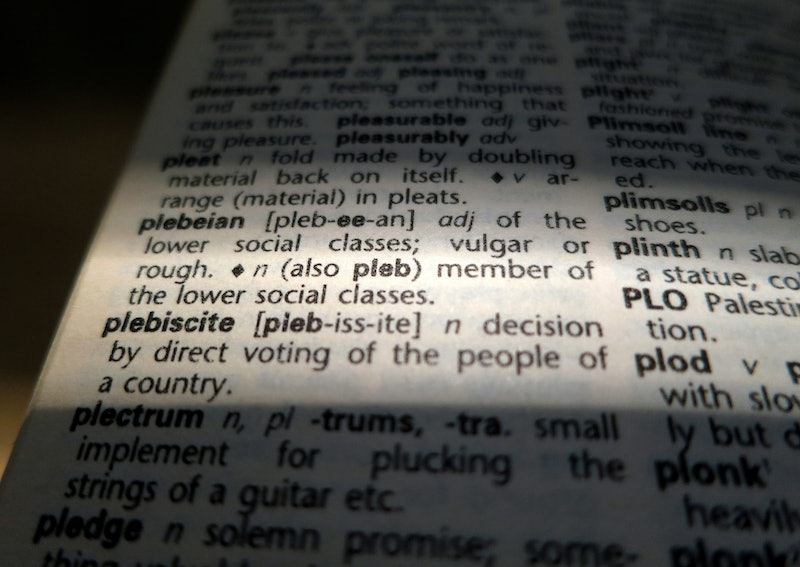 If the terms people searched for on the internet could tell you a bit about the kind of environment we live in, then 2018 sure was chaotic. Dictionary.com's most searched words this past year paint a picture of a politically and socially tumultuous year, replete with insults, heavy sociological terms, and even one pronunciation-based meme that drove the internet wild back in May.

According to its annual list, internet users dug through Dictionary.com to learn more about words like "pissant." There's some context, of course. This particular word, which ranks at 10 in the list, came into the spotlight after radio host Alex Reimer called football player Tom Brady's young daughter a "pissant" during a call on the show in 2018.

Per Dictionary.com, which calls "pissant" a "vulgar slang," the word refers to an unimportant person. It's no surprise then that Brady hung up on Reimer because of it. Reimer, who was temporarily suspended from his show, later apologized: "No child should ever be mocked. It sickens me that I used my platform in such an odious manner."

In ninth position on the Dictionary.com list is the word "amorality," the absence of moral value. And this time it involved an anonymous figure in the administration supposedly leading what they called the "resistance" from within. This unidentified individual claimed in a widely shared and speculated upon New York Times op-ed in September that "amorality" ran deep in Trump's government.

Coming in at number eight was "stochastic terrorism," according to Dictionary.com. The term may sound obscure, but attention toward it spiked in June when right-wing personality Milo Yiannopoulos said that members of the press ought to be "gunned down on sight."

The provocateur's remarks came on the head of the day a gunman killed five people at the Capital Gazette office in Maryland.

Dictionary.com defined "stochastic terrorism" thus as "the public demonization of a person or group resulting in the incitement of a violent act, which is statistically probable but whose specifics cannot be predicted."

At seventh came "laurel," which referred to a temporary but nonetheless wild meme in May. It came down to a simple question about a recording: did you hear "laurel" or "yanny" in the audio clip? The answers varied for many web users. And so, you have the story of "laurel." (Or "yanny," if you heard that.)

At sixth is "con job." In its list, Dictionary.com stated that searches for the term came around the timing of the confirmation hearing for Supreme Court Justice Brett Kavanaugh. At the time, as multiple women alleged Kavanaugh sexually assaulted them (which he denied), Trump called the accusations a "con job."

People also searched for “footages,” according to Dictionary.com. And this time it involved Cardi B and Nicki Minaj’s feud. Back in October, Cardi B used the word “footages” in an Instagram video while referring to her altercation with Minaj at the New York Fashion Week. “How you sayin' that I got ragged by Rah Li when there is so many footages of that night,” the rapper said in her clip, “every single angle and where am I getting ragged at?”

"Self-made” made an entry at the third number in the list, after Forbes described Kylie Jenner as “self-made.” Some people had a huge laugh at that one, as they viewed Jenner, who was born into wealth, as the very opposite of the term.

Entering at the second position was a more politically heavy term known as "hegemonism," which essentially refers to a country using various strategies for world domination.

And at number one came "dog whistle," which Dictionary.com defined as "a political strategy, statement, slogan, that conveys a controversial, secondary message understood only by those who support the message." The searches for the term came in August when Florida Republican Ron DeSantis indirectly spoke of African-American Democrat Andrew Gillum and said that voters shouldn't "monkey this up" by voting for the then-gubernatorial candidate Gillum.

Based on these words, it looks like 2018 was a politically loaded and divisive year — with the occasional dose of levity brought to you by a meme.