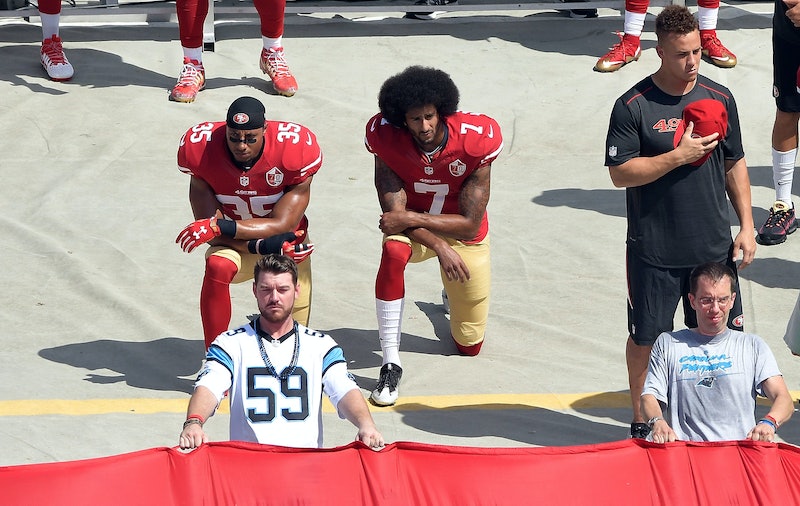 Before the big game even kicked off on Sunday, people were wondering if any players at the Super Bowl kneeled for the anthem. After Colin Kaepernick sat for the U.S. National Anthem for the first time back in August, it seems like no one can talk about the NFL without discussing the movement he started. And the Super Bowl is no exception.

Days after the media noticed Kaepernick sitting as opposed to standing during the anthem, he explained his reasoning. He told the press that he believes standing up for the oppressed could really "unite" his team.

I'm going to continue to stand with the people that are being oppressed. To me, this is something that has to change. When there's significant change and I feel that flag represents what it's supposed to represent, and this country is representing people the way that it's supposed to, I'll stand.

This time around, it doesn't look like any of the New England Patriots or Philadelphia Eagles players reignited the Take A Knee movement. However, some people on Twitter are joking that the flag holders were indeed kneeling. As you can see from the photo above, though, that wasn't necessarily by choice. It's because the flag is so low to the ground — plain and simple.

No one seemed to have kneeled or sat out the anthem inside of the U.S. Bank Stadium, but that doesn't mean the movement has died out. A rally to protest police brutality did, in fact, take place near the stadium before the game began, according to reports. Another protest took place near the Minneapolis Metro Transit Green Line, the Minneapolis Star Tribune reported Sunday.

For Minneapolis — the location of this year's Super Bowl — the protests against police brutality hit close to home. A Facebook event called the Superbowl Anti-Racist Anti-Corporate Rally explained the disappointment at the way police brutality has been addressed, especially considering the amount of money the city put into the Super Bowl.

Super Bowl 52 is coming to a community that has taken to the streets many times against local police killings. From Jamar Clark and Justine Damond, to Philando Castile and Phil Quinn, justice has been denied for these and many other lives stolen by Minneapolis and St. Paul cops. Our communities will dish out millions to these same police departments to provide "security" for the Super Bowl, while nothing has been done to address police violence.

The police released a statement prioritizing public safety during the huge event.

The Minneapolis Police Department has a long history of respecting people's 1st Amendment rights while balancing the needs for public safety. Any response to demonstrations will be done to ensure these priorities remain consistent. MPD expects our approach, and our successful track record regarding peaceful and lawful demonstrations, to remain the same during Super Bowl week.

Trump, for his part, hasn't done much to address the protesters' concerns. Before the game on Sunday, the White House released a statement urging everyone to stand during the National Anthem to honor those who have fought and died for the country. The statement mentioned nothing about police brutality, inequality, or anything the Take A Knee movement is actually protesting.

Trump is likely pleased by the fact that the Super Bowl players each stood for the anthem this time. But that doesn't mean the protests and rallies won't continue outside of the stadium.