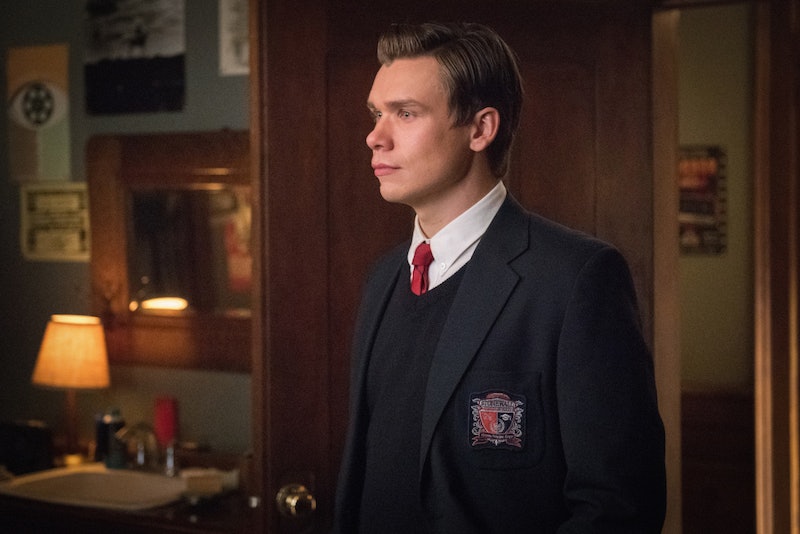 Spoilers ahead for Riverdale Chapter 67, "Varsity Blues." Throughout Season 4, Riverdale fans have been subjected to a number of flash-forwards suggesting that Jughead is (seemingly) dead. Previous suspects have included Betty, Charles, and Archie, but now it's looking increasingly likely that Bret Weston Wallis killed Jughead. At the very least, he doesn't seem innocent.

In the Jan. 22 episode, we're told that Betty didn't get into Yale, but that Jughead has been given the opportunity to interview for a place there. He's later informed that he's been accepted, which Jug understandably has mixed feelings about, since his girlfriend won't be going with him. In that same moment, Bret relishes in interjecting that he also got into Yale, so maybe they'll be roommates again next year. Goody!

Cut to the final moments of the episode, and yet another flash-forward shows Betty crying in Jughead's dorm room. This is likely PJ — as in, post-Jughead. Bret then comes in and tells Betty that she doesn't have to pretend she's crying because no one else is around. It will just be the two of them in New Haven that fall, he says, implying that Betty has now been accepted to Yale, too. Did she and Bret conspire to kill Jughead so she could take his spot at Yale? How would such a cursed collaboration even come about?

It's perhaps too early to know for sure whether Bret is really Jughead's murderer — if there even is a killer. Let's not forget that there are a number of plausible theories that Jughead faked his own death, or that these flash-forwards actually take place in one of his Baxter Brothers novels.

But if someone were to kill Jughead, it had to have been Bret, right? He's been a clear antagonist since he was first introduced to the show, and considering Jughead is his main academic rival — both at Stonewall and, apparently, in college — Bret would have serious motivations for getting him out of the way. Plus, he refers to Jughead by his proper name of "Forsythe," which is the behavior of a full-blown psychopath, to be perfectly honest.

In fact, Reddit user everythingssilent speculated that Bret is in love with Jughead — hence his weird skulking behavior. Because, in case you haven't noticed, Bret... is weird. He's a weirdo. He doesn't fit in. And given his confession during Jug's Quill & Skull initiation, he's certainly capable of dark things. Could love have driven him to kill? After all the utterly ridiculous things that have happened on this show, it would actually...make sense?