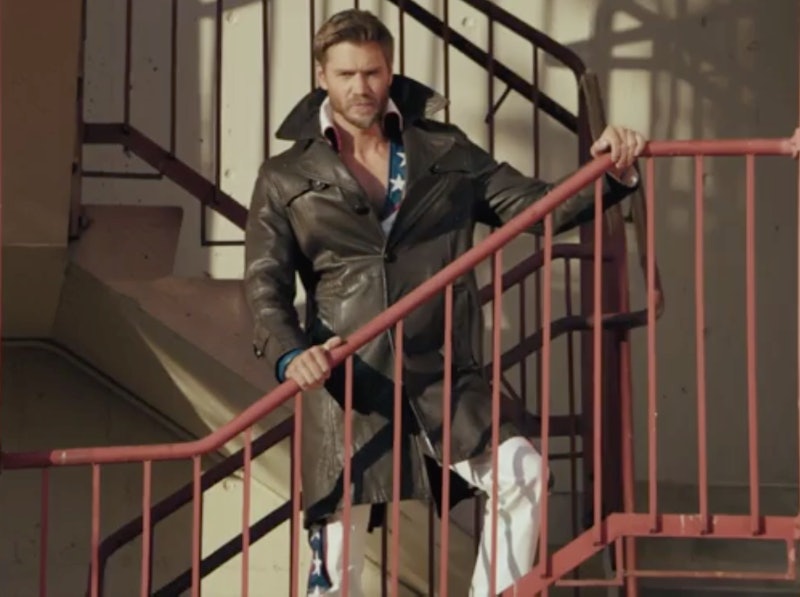 Spoilers ahead for Episode 3 of Riverdale Season 4. If you thought that Riverdale couldn't top the absurdity of a mythological villain with branch wings who turned out to be approximately 10 different people, you were wrong. In the Oct. 23 episode, we learn that Edgar's grand plan to escape the FBI was to make his wife Evelyn drive the Farmies off of a cliff in a bus while he...escaped in a rocket ship. Yes, a. rocket. ship. Cheryl is already talking to her brother's corpse in the basement, Hiram apparently just decides when he does and does not want to spend the night in prison, and psychological warfare is breaking out over a literary seminar. So, sure. Let's add a rocket.

Though this storyline is obviously borrowing from real-life cult mass murder plots, it's a poorly constructed scheme that raises a lot of questions. First of all, are we meant to believe Edgar just happens to know how to fly a rocket ship? Because between cult leader, black market organ seller and, apparently, rocket scientist, this guy has quite the colorful résumé. And secondly, where was he planning on going? The moon? Does he have a space station set up? Was he just gonna fly around in space for all of eternity? The only thing that isn't in question is why he chose to wear that star-spangled white jumpsuit, because if he's gonna go down, it may as well be in a certified lewk.

Fortunately for Betty — but unfortunately for anyone wanting some answers about this nonsense — Alice shot Edgar before he had a chance to take off in said rocket. So unless Evelyn gets in the cockpit, we'll never know what that rocket was capable of.

It's still baffling that he even had one in the first place. At least the supplies needed for for the Gargoyle King's costume could be found at the nearest A.C. Moore Arts & Crafts (which would probably be called something like "D.O. Less Arts & Crafts" on Riverdale). Rocket supplies are a little more difficult to come by, especially when you're in hiding. in fact, we really need to know more about the Farm's engineering department in general. Edgar also sent Polly to Betty and Charles with a bomb strapped to her chest, which for some reason her trained FBI agent brother insisted that Betty, a teenager, defuse.

All that being said, there is an Archie Comics precedent for this wild turn of events. Riverdale creator Roberto Aguirre-Sacasa tweeted out the title page of this episode's script (above) which references an old Betty & Veronica comic titled "Rocket Astroteens." So, it definitely could have been sillier. At least Betty and Veronica weren't the ones headed to space.

More like this
Ashton Kutcher Wants Danny Masterson “To Be Found Innocent” In Rape Retrial
By Jake Viswanath
'The Queen’s Gambit' Season 2 Tweet Wasn’t From Anya Taylor-Joy
By Mary Kate McGrath, Jack Irvin and Grace Wehniainen
Pamela Anderson's Sons Brandon & Dylan Have Their Own Hollywood Careers
By Arya Roshanian
Linda Ronstadt’s “Long Long Time” Plays A Pivotal Role In The Last Of Us
By Brad Witter
Get Even More From Bustle — Sign Up For The Newsletter
From hair trends to relationship advice, our daily newsletter has everything you need to sound like a person who’s on TikTok, even if you aren’t.