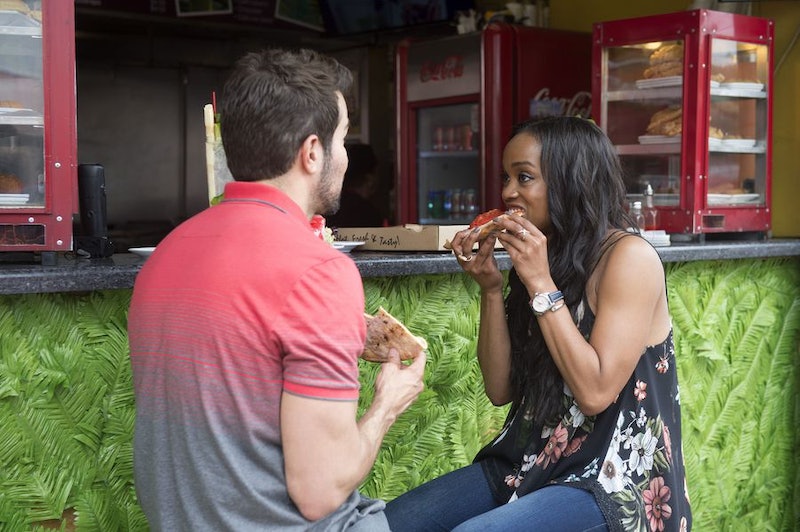 It's kind of crazy how quickly Rachel Lindsay's season finale of The Bachelorette flew by, but here we are, finally about to find out who she chooses to spend the rest of her life with. But before that final rose ceremony began at the end of Monday night's new episode, Rachel had one more overnight date to get to. So do Rachel and Bryan have sex in the Fantasy Suite? There's no denying that the pair has had serious chemistry all season, but that doesn't mean their Suite time is our business.

Bryan may have been a solid contender all season long, but Rachel's dates with Eric and Peter went so well that he definitely had some tough competition going into it. But things went really well on the actual pre-Suite date, and when Bryan was offered the chance to spend the night in a room with Rachel, he agreed immediately — but who didn't see that coming? Once they got to their room, they started the night off with an "I love you" from Bryan and plenty of smooching before they kicked the cameras out, so it seems like it was a very successful night in their relationship.

It definitely seemed like he and Rachel got close enough on their date that they may have decided to sleep together, there's no way of really knowing what happened between them after the cameras left... and even if there was, it's something that should stay between the two of them anyway.

After all, these are Rachel's final days before making one of the biggest decisions of her life, and considering that this is likely the first time she and Bryan have gotten to spend together alone since they met? It's a big deal! It's a special and private time, and even though we've all witnessed their entire relationship from its beginning, it doesn't mean that as fans we're entitled to such personal information.

Besides, Rachel and Bryan have had so much chemistry all season long that they don't seem to be hurting in that department, anyway. The intimacy is there... but is a lifetime commitment there too? Not too much longer until we all get to find out.