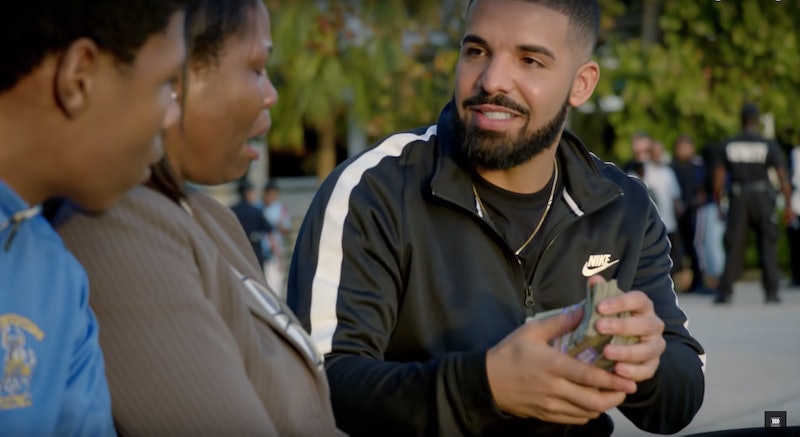 Giving fans plenty of reason to smile with his latest project, Drake donated $1 million in his "God's Plan" music video, and the internet is completely humbled by his display of generosity. According to Complex, the rapper reportedly used the entire budget, which was intended for the shooting and production of his highly anticipated "God's Plan" video as a charitable donation to those in need around the greater Miami area.

As the powerful video kicks off, fans catch a glimpse of the exact amount which is revealed to be $996,631.90. The opening title card goes on to read, “We gave it all away. Don’t tell the label." The video, which was notably released a day ahead of National Random Acts of Kindness Day, quickly moves into Drake making his way around town to share the wealth with some unsuspecting fans in the area.

Among the many contributions, Drake donated $25,000 to Miami Senior High School, while also offering a University of Miami student a $50,000 scholarship check, according to People. Throughout the moving vid, he also makes an announcement over a bullhorn in a supermarket, telling shoppers, "Anything you want in the store is free, so grab whatever you guys want." Drake additionally gave another $50,000 to a women's shelter and surprised a few unsuspecting families with stacks of cash. He even made a stop at the mall to offer some fans an opportunity to purchase whatever they'd like as he danced around the department store with Pittsburgh Steelers wide receiver Antonio Brown. It was earlier reported that the pair teamed up to take a local hotel maid on a $10,000 shopping spree, according to the Miami Herald.

The acts of charity brought many of the recipients to cheers and tears as the rapper showcased a huge display of kindness to those around him. Fans of the video were awed by the outpouring of generosity, taking to Twitter to share all their emotions.

1. It May Be Drake's Best Ever

Calling it out as one of Drake's better productions, this fan was brought to tears while watching.

The video also had this viewer holding back the tears.

Giving Drake many accolades for his actions, a fan called the video "incredible."

This fan has some pretty awesome plans for a remix.

Revealing that they were "inspired" by the vid, this fan hopes that can too someday be a help to others

This fan gives the video a "perfect" score.

7. It Makes You Feel Generous

Drake's "God's Plan" display has this fan in the mood for giving.

Completely inspired by Drake's work, this commenter hopes to be able to do the same for their community some day.

It was an emotional moment for this fan.

This fan couldn't figure out where the tears were coming from.

The GIF above conveys what a life-altering experience it was.

12. It Kind Of Makes You Wanna Pay It Forward

Meanwhile, this Twitter fan hopes to pass the love along — maybe.

The video is certainly one of Drake's more emotional productions as of late. Among the many touching moments throughout, there is a heartfelt convo between Drake and a young man in which he gives a sweet shout out to all of mothers of the world — including his own. As the video closes, he shares,

We're nothing without our mothers. Gotta make sure you take care of your mom, too, no matter what you do. It's all we got. Trust me. That's my world.

In a Feb. 15 Instagram post, Drake referred to the music video as "the most important thing I have ever done in my career" and it seems that his fans agree. Solidifying his status as an icon in the music world, Drake has won over the hearts of many with this latest display of kindness.