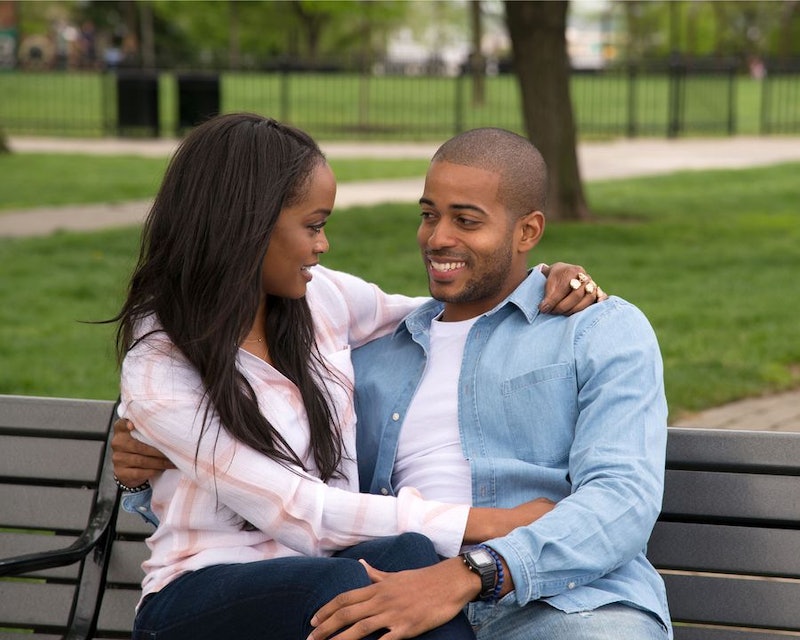 It seems like Rachel Lindsay's season of The Bachelorette has flown by, and believe it or not, it's already time for Fantasy Suite dates. After all three of her remaining suitors had the opportunity to fly to Texas and meet Rachel's family, everyone was whisked away to Spain, where they were officially invited on the overnight dates. First up was Eric, who was super pumped just to be in Spain to begin with. But did Eric and Rachel have sex on The Bachelorette? Honestly, however they chose to spend their night together is none of our business.

Despite the fact that this is a reality show and we've been watching Rachel and Eric's relationship develop from their first meeting, whatever they wanted to do with their time alone together is between the two of them and them only. It's basically the only private time these two got together before Rachel makes the decision about whether or not this is a man she wants to spend the rest of her life with, and that's heavy stuff. So even though we got to see Eric accept Rachel's invite for the date, there's no way of knowing what may or may not have happened behind closed doors.

And regardless of whether or not they had sex, it seems like things have certainly progressed thanks to that date. After all, Eric did tell Rachel that he loves her for the first time — not just that he's falling in love with her — and that's a very big deal. And the next morning, Rachel said that they took their relationship to the next level on that date... but then, she added that this is something that tends to happen every time they spend time together. Good sign for their relationship, but it doesn't necessarily mean that anything happened between them.

So does Eric stay or does he go? It's not clear exactly what his future holds, but right about now, it's looking pretty good. He might not be heading home from Spain just yet.