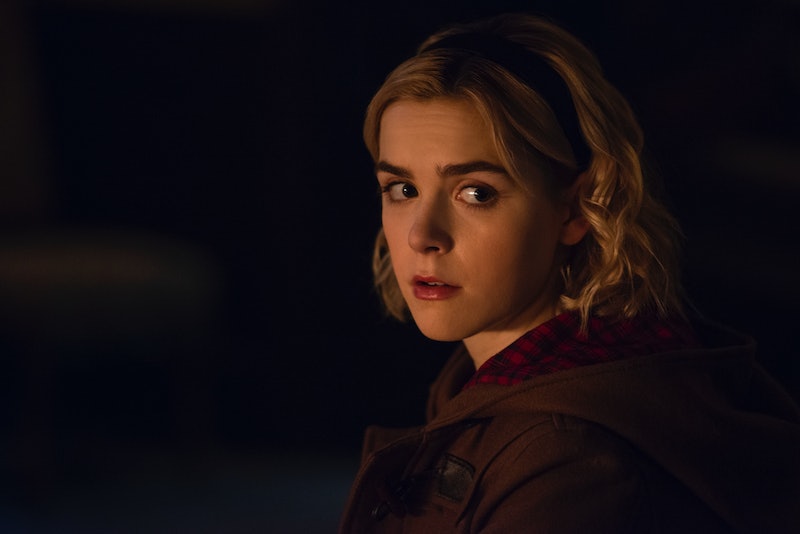 Spoilers ahead for The Chilling Adventures of Sabrina Part 2. Sabrina has been chasing answers about her parents' death since the very beginning of The Chilling Adventures of Sabrina. And, in Episode 5 of Part 2, she gets one step closer to learning the truth. Edward Spellman's supposed ghost told Sabrina that Father Faustus Blackwood murdered Sabrina's parents. I say "supposed" because moments after Edward's ghost disappeared, Ms. Wardwell was left standing there as though she had instigated the whole thing. Did she simply summon the ghost, or did she plant the story too?

Nothing is ever as it seems on this show, but all signs point to the story being true. Blackwood proved throughout Part 2 that he would do just about anything to shape the Church of Night according to his own ideals and to stop any proposed modernization. Considering that Edward was on his way to meet with the Anti-Pope in Rome to share his own manifesto, it's not surprising that Blackwood would stand in the way of that. Edward's manifesto created new tenants for the church stating, among other things, that witches were allowed to be with mortals and that women would be the matriarchs of the church. Essentially, Edward's manifesto was the opposite of the sexist boys' club that Blackwood wanted the church to become.

Edward's ghost told Sabrina that Blackwood cast down the plane carrying him and Diana Spellman to Rome, and they died in the crash in the middle of the ocean. If that story is true, it would be news to everyone in the church. According to Zelda, the Witches' Council conducted an "independent inquiry" into the crash and determined that it was just caused by a mechanical engine failure. No one in the coven believes the Spellmans were murdered at all, much less by Father Blackwood.

But Ms. Wardwell soon revealed to Sabrina that the inquiry was started by Blackwood and its findings were reviewed by him. So if he did stage the crash, of course he would say it was a mechanical accident rather than outright murder. Ambrose also believed that Blackwood was capable of such a thing, because his tarot card reading hinted that Blackwood wanted to kill the rest of the Spellmans, too.

After learning this, Sabrina tried to reveal Blackwood as a murderous traitor during his wedding. She pretended to be the ghost of her father and had Nick pose as her mother to out Blackwood in front of the coven. But Blackwood saw right through their glamour spell and expelled Nick and Sabrina from the coven for good measure.

And not only that, but he's continued to murder whoever he wishes without getting caught. Blackwood also killed the Anti-Pope (via Ambrose, who was being puppeted by the familiar that Blackwood gifted him). But he got away with that too.

However, Sabrina knows the truth, and she will stop at nothing to avenge her parents' deaths and spread her father's manifesto. Blackwood can't run forever, and the church will see who he truly is in due time — just hopefully before he murders anyone else.