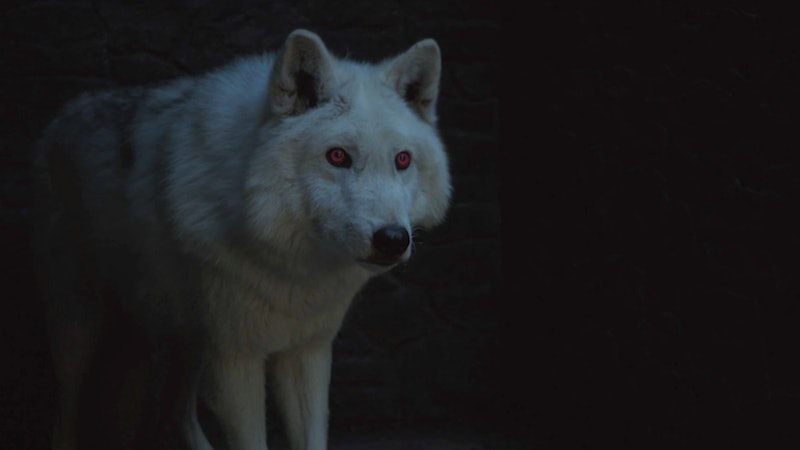 Many lives were expected to be lost during the big Battle of Winterfell episode on Game of Thrones. So when Ghost was shown on the front lines alongside the likes of Jorah, fans rightfully started to panic about the loyal direwolf's fate. Then there the fact that he was completely MIA during the rest of the episode, leaving many to wonder whether or not Ghost survived the Battle of Winterfell on Game of Thrones, or if he was yet another devastating casualty of the Great War between the living and the dead. Luckily, it seems that the Episode 4 promo has answered that question for us. Spoilers ahead.

The clip shows the survivors of Winterfell setting their sights on King's Landing, determined to find a way to defeat Cersei, even though their armies are significantly depleted thanks to the Night King and his Army of the Dead. However, in a blink-and-you'll-miss-it moment, you can see a large group gathered inside of the Winterfell grounds — and among those in the crowd is Jon Snow's direwolf, Ghost. It's unclear exactly how he managed to make it out of that battle alive, but let's just all be collectively grateful that it happened. After all, this good boy has barely received any camera time this season.

The moment happens really fast around the 18-second mark, so you may have to pause the video in order to get a good look at him, but there's no mistaking that it features our four-legged friend in question. Of course, that's not to say that he'll manage to survive until the end of the series, but as of this moment in time, he's still with us.

During an interview with The Huffington Post in September 2018, visual effects supervisor Joe Bauer confirmed that Ghost would appear multiple times throughout Season 8 and play a significant role in the storyline. "Oh, you'll see him again. He has a fair amount of screen time in season eight," Bauer told the outlet at the time. "He's very present and does some pretty cool things in season eight."

No other specifics were mentioned in regards to Ghost's involvement on the series, however, he hasn't had that much screen time yet, so there should definitely be a lot more face time with him to come. Because even though the fight against the Night King may be over, everyone still has Cersei to contend with before anyone else can possible sit on that Iron Throne, so Jon's going to need all the help he can get.

Ghost is one of only two Stark direwolves still alive on the show. Season 7 reunited Nymeria and Arya for a brief moment to show that she was still around, but aside from that Ghost has been the constant out of the pack, always there to assist Jon and his comrades whenever needed. Will he continue on this survival streak or end up sacrificing himself for a greater purpose? Only time will tell, but you may want to have a few extra tissues on hand next Sunday just in case.