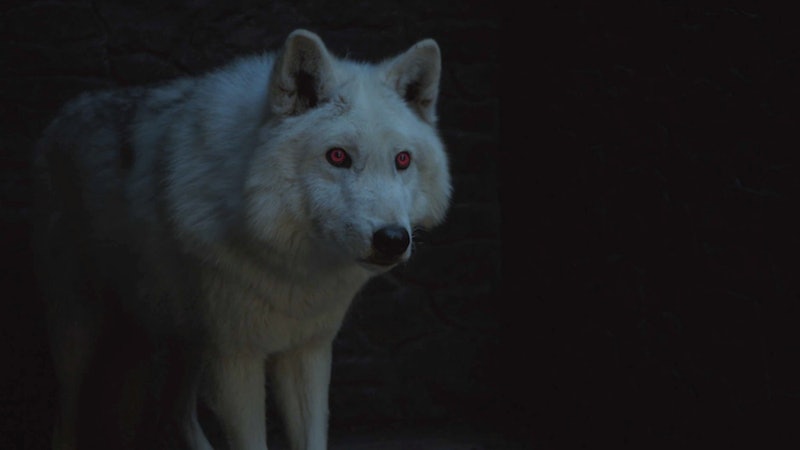 The Battle of Winterfell is gearing up to be one of the most epic war sequences in Game of Thrones history as the armies of both the living and dead face-off for the fate of Westeros. The Night King has hundreds of thousands of the dead marching by his side, which means Jon Snow is going to need as much help as he can get — even in the form of his loyal, four-legged companion. But will Ghost be in in the Game of Thrones Season 8? Having a direwolf on their side is sure to help even the odds. Maybe not to the extent of Daenerys' dragons, but Ghost could definitely end up saving a few lives along the way. But will he be around to do so? Thankfully, that question already seems to have been answered.

Back in September 2018, visual effects supervisor Joe Bauer confirmed to The Huffington Post that Ghost would show up multiple times throughout the show's final season and have a significant part to play. "Oh, you'll see him again. He has a fair amount of screen time in season eight," Bauer said to the outlet during the interview. "He's very present and does some pretty cool things in season eight." Unfortunately, Bauer was unable to go into any further detail than that, but odds are this means Ghost and Jon will definitely be reunited at some point during that time. It also seems to indicate that Ghost will be involved in the Battle of Winterfell.

Ever since the very beginning of the show, Ghost has remained by Jon's side, accompanying him to the Night's Watch and beyond the Wall itself. He's always been there to protect Jon from harm whenever he can and will undoubtedly continue to do so for the remainder of the series. However, he's also one of the few Stark direwolves to have survived this long — the other one being Arya's wolf, Nymeria.

All the rest of the wolves have died in some tragic way and usually as a result of defending the Stark family. So if Ghost really is going to help in the battle against the White Walkers, there's a strong possibility that he won't make it out alive.

The body count is expected to be significantly high during the show's final season. Many lives will be lost as the battle between good and evil reaches its climatic conclusion. And if Ghost is given the option to sacrifice himself in order to help Jon, there's little doubt that he would do it without hesitation. Would it be devastating to see? Absolutely. But when has Game of Thrones ever gone easy on its viewers?

Regardless, it'll be great to see Ghost nonetheless, especially since we haven't caught a glimpse of him since Season 6 when he laid by Jon's deathbed prior to his resurrection. So whatever fate ends up befalling him, it sounds like this beloved pup will at least be given the proper send-off he so rightfully deserves.