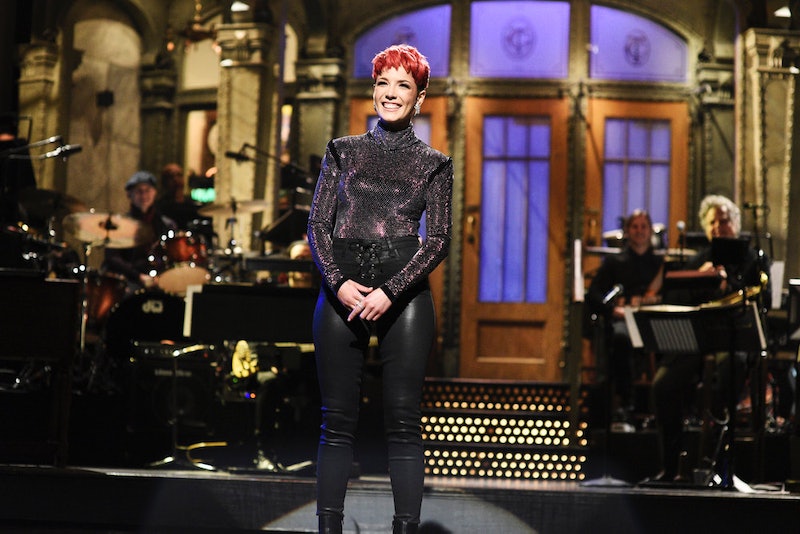 The Feb. 9 episode of Saturday Night Live was going to be a major event for Halsey no matter what, as the former musical guest was returning to the show's stage not only to perform, but to make her hosting debut. She made the most of her time at the mic throughout the entirety of the episode, but one moment in particular caught viewers' attention. Fans are convinced Halsey's SNL performance referenced G-Eazy, and they were celebrating her all night for seemingly calling out an ex on live TV.

While the set design mostly featured random city shoutouts, it was hard to miss the giant "Ashley, I cheated" scrawled behind Halsey. In that context, the phrases "In Minneapolis," "In New Orleans," "In Austin," "At home in Los Angeles," "More places that I can even remember" came across as excerpts from what feels like an incredibly emotional letter detailing a history of betrayal. These messages could be hinting at the rumored infidelity in her relationship with G-Eazy, and it wouldn't be the first time she suggested he'd been unfaithful.

In July 2018, Halsey posted on her Instagram story that she and G-Eazy would be taking a break after roughly one year together. She wrote that she was "eager to continue the upcoming passage of time dedicating myself to my art and my career, and the duration of my tour. I wish him the best. Thanks for respecting our privacy at this time." The message was level-headed, but didn't provide much insight as to the reason behind their separation. However, a day later Halsey posted a cryptic tweet that said merely "pumpkin eater," which seems to be a weird thing to tweet in July which is at least three months before prime pumpkin eating season.

However, fans took as an allusion to the popular phrase "cheater cheater, pumpkin eater," and that she may have been hinting G-Eazy had stepped out on her.

If her "pumpkin eater" tweet was a subtle jab that someone cheated on her, then the set design for her performance of "Without You" on SNL is more akin to a knockout punch. She never called out whoever she was referencing by name, but that isn't what the performance is about. If Halsey really wanted to put someone on blast, she could have done so far more explicitly, but instead the stripped-down performance seemed to be an introspective look at her own pain. This focus on herself was further reflected in her performance of "Eastside," which had her painting a large portrait of herself while singing.

Whether or not Halsey's performance of "Without You" was directly referencing G-Eazy — who, according to E! news, has reportedly moved on to a new relationship — there's no denying that the performance had a notable impact on her fans, who immediately tweeted out their support for the singer. Halsey's SNL performance was so emotional and powerful that it frankly doesn't matter what pain, if any, was used to inspire the performance. The only thing that mattered was that she used her platform to say exactly what she wanted to, even if she had to paint those words instead of singing them.