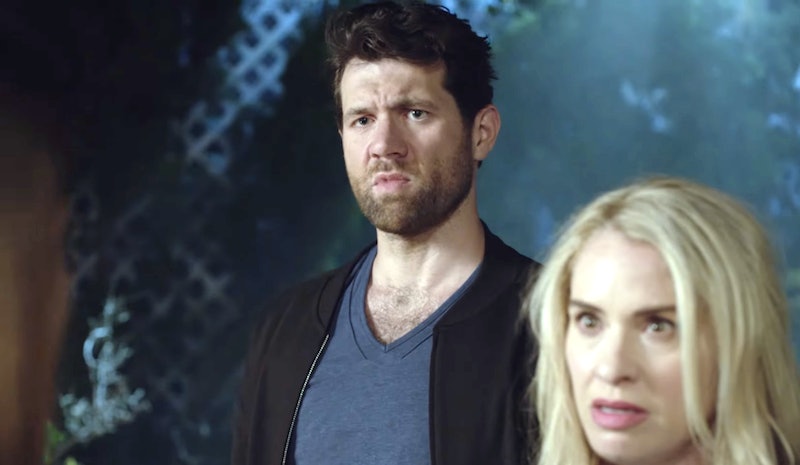 Harrison and Meadow moving in across the street from Ally and Ivy definitely isn't good for the Mayfair-Richards family, but it is good for American Horror Story viewers. Spoilers for Episode 3 follow. Did Harrison kill Meadow on AHS: Cult? The characters played by Billy Eichner and Leslie Grossman delivered a delicious dose of humorous venom to this dark season in the second episode and more of their backstory is revealed in "Neighbors From Hell." While it seemed obvious that they were part of Kai's posse in "Don't Be Afraid Of The Dark," the Sept. 19 episode confirms it with both Harrison and Meadow doing the pinky ritual with Kai. Kai forces Harrison to say that he wishes his wife was dead, and soon, Harrison screams that he woke up next to her corpse. If Meadow is dead, Harrison's actions most likely led to it. But did he actually physically murder her?

Not long after Meadow and Harrison tell Ally and Ivy that the town killer marks their next victims with a smiley face spray-painted on their home, Harrison is outside of his new house covered in blood. Based on the information he gives to the police and the amount of blood, it certainly seems like Meadow has been murdered in her bed. If that is the case, Harrison is a suspect since Meadow says to Kai during the episode, "I'm afraid the man I love is turning against me," with Kai responding, "He is."

In his own pinky game session, Harrison's admits his biggest regret is, "That I married my f*g hag." Kai forces Harrison to say that he wishes Meadow was dead and even though Harrison doesn't seem to believe those words at the time, saying them while he is locking pinkies with Kai could mean Meadow's death is inevitable. That seems to be the case at the end of "Neighbors From Hell," but her supposed murder doesn't necessarily mean that Harrison wielded the knife to kill Meadow. Just by telling Kai he wants her gone from his life, he could have unintentionally sentenced her to death.

However, maybe that's giving Harrison a bit too much credit since he does have the motive and opportunity to kill Meadow. Yet, AHS doesn't show Meadow's dead body, which very well could mean that Meadow is still alive. Meadow and Harrison seem to have been placed by Kai to become Ally's neighbors to facilitate either her breakdown by fear or her giving into her hate and becoming one of Kai's followers. Because of that, Meadow could be alive and all of this an elaborate setup to make Ally snap, since Harrison accuses Ally of being guilty to the cops. Just like Harrison telling Ally that the town blackout was a terrorist attack when it evidently wasn't, he may be playing mind games with her again here.

At this point, it feels safe to assume that everyone is in on Kai's cult. And since Detective Samuels seems to be dating Harrison, his accusations to the police could be a ploy to push Ally closer to a breakdown. There's a slight chance that Meadow could be alive, but Kai's hatred toward her and Harrison's wish doesn't bode well for her. Even if she was killed just to freak out Ally, her death could be a sacrifice to Kai's cause. And if Harrison is the one who murdered her, well then, he is a much more devoted follower of Kai than AHS fans may have realized.