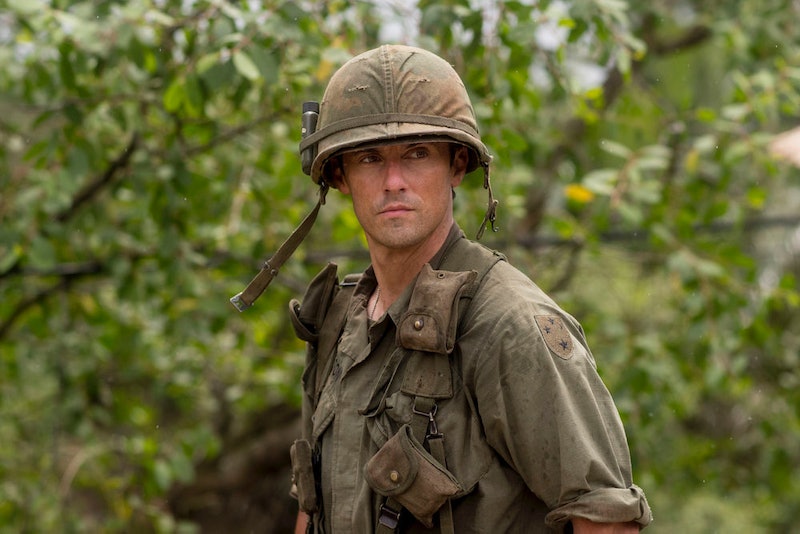 The final few moments of Tuesday night's midseason finale of This Is Us packed a particularly shocking punch when it was revealed that Jack's brother Nicky is alive and didn't die in the Vietnam War after all, like we thought. But that still leaves fans with a ton of questions, especially when it comes to figuring out Jack's involvement in it all. Did Jack know Nicky was alive on This Is Us or was he just as in the dark as we were? As always, this show answers one question by creating a million new ones in its place. However, according to co-showrunner Isaac Aptaker, you shouldn't totally rule out the notion that Jack knew more than he led others to believe.

“There’s definitely a possibility that Jack knew more than he was letting on to the family over all those years,” Aptaker told TVLine in an interview shortly after the episode aired. “We will be on this mystery with Kevin as he tries to uncover what happened to his uncle, what his dad knew about it, and where [Nicky] might be in 2018.”

Of course, Kevin doesn't yet know for sure that his Uncle Nicky is alive, but he's well on his way to drawing that conclusion by the end of This Is Us' Season 3 winter finale. Just as he was about to leave Vietnam with zero answers about his father's time there, Kevin's tour guide pointed out that Nicky's name wasn't on the deceased list of names in the Vietnam veterans registry, meaning that if his uncle died, it didn't happen during the war. Thankfully, we, as viewers, didn't have to wait long to get a little more intel about what this all means. The final scene of the episode showed an older man standing in a trailer with a stack of mail that was addressed to Nicholas Pearson, confirming that he's still very much alive.

This is obviously game-changing news and raises a ton of new questions. For example, the address showed that Nicky is now living in Pennsylvania, which means he might not be all that far away from Pittsburgh. Does this indicate that he and Jack were still in contact and perhaps even saw each other from time to time? How much does Nicky know about the other members of the Pearson family? Has he been keeping track of them throughout all of these years? Is he even aware that Jack died?

These are all questions that the series will need to dive into during the second half of Season 3. However, co-showrunner Elizabeth Berger promised TVLine in the same interview that fans will get to check back in with Nicky from the two different timelines in order to see how this scenario all played out. "We will actually be seeing [Nicky] in more than one time period, post-war, and we are definitely going to be meeting him in present-day," she stated.

The episode also included various flashbacks to Jack and Nicky's time together in Vietnam, which ended with a boat explosion, a missing little brother, and a terrified Jack diving into the water to save Nicky. Will he get to the wreckage of the explosion and realize that his brother is fine or is he actually led to believe that Nicky perished?

These are the questions fans should be asking themselves, according to series creator Dan Fogelman. "Psychologically it’s a big part of what we get into in the back half of the season pretty quickly," Fogelman shared with Entertainment Weekly in an interview. "Which is, not just what happened, not just where is and what happened to Nicky, but also, what was going on with Jack all of this time? What did Jack know — or not know?"

Jack told Rebecca during their first date that his brother died in combat, though now it's unclear if he was lying to her or if he really thought that to be true. Either way, it looks like this new twist will allow Jack's family to learn about a side of him they never knew existed.