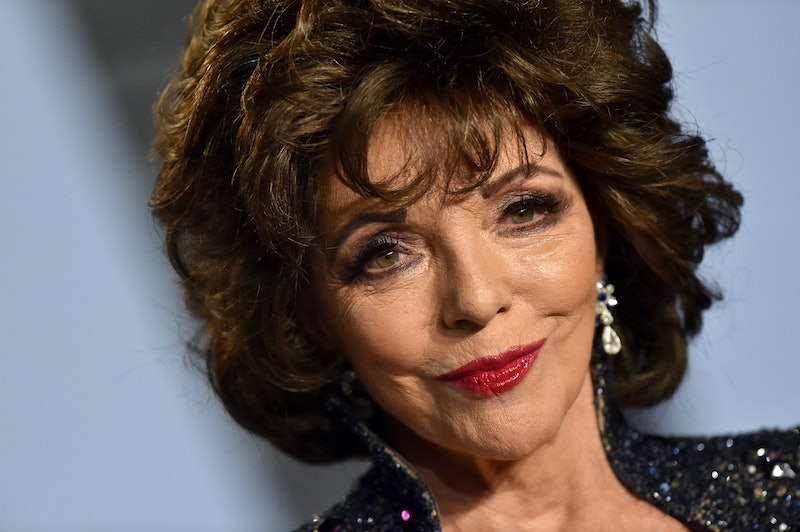 The legendary court case between actor Joan Collins and publishing company Random House has been spectacularly retold in the Sky Arts comedy series Urban Myths. During the very public court battle, which took place way back in 1996, the Dynasty star was accused of handing in "unreadable" drafts of her unreleased book. The publisher went on to demand that Collins pay back her huge advance payment — however, the actor refused, and a dramatic legal war ensued. But did Joan Collins write any books besides the never-published Random House novel?

Well, yes, she most certainly did, and in addition to forging a successful career in acting, Collins is also recognised as an establish best-selling author. According to her official Amazon page, Collins has published a whopping 17 books, which include eight nonfiction novels such as My Secrets, and The Art of Living Well: Looking Good, Feeling Great. Collins has also penned six fictional tales, including the likes of Infamous and The St. Tropez Lonely Hearts Club. The latter sounds especially intriguing, as the Heat magazine review on the front cover reads: "Sun, sex, and lots of delicious scandal from the queen of glam." Wow. The actor's most recent book, the memoir Passion For Life, was released in 2013, and according to the Express, joined the list of her three previous memoirs, Past Imperfect, Katy: A Fight for Life, and Second Act.

As previously mentioned, the story of Collins' court case with book publisher Random House is being told in the third series of the Sky Arts comedy-anthology Urban Myths. According to the British Comedy Guide, the episode revolves around the 1996 trial that occurred after the author and actor was paid a huge advance for an upcoming novel. However, the publishers claimed that the manuscript sent over was unpublishable — and this led to one of the most talked-about trials of the nineties. An official Sky synopsis of the episode reads:

"In one of the most glamorous trials ever, its Joan Collins vs the publishers who paid her a huge advance for her book only to claim it was unreadable."

"Urban Myths: The Trial of Joan Collins" stars The Crown actor Victoria Hamilton as the Hollywood legend. According to Sky, the episode also stars Mark Heap, Haydn Gwynne, and Leo Wringer. Britain's Got Talent judge David Walliams also appears in the episode — which he co-wrote alongside a team of comedy writers known as the Dawson brothers.

As reported by Digital Spy, the third season of Urban Myths features (mostly) true stories surrounding celebrity figures such as Princess Diana, U.S. President Donald Trump, and Queen's lead singer Freddie Mercury. The series consists of eight episodes, each of which promise to reimagine some of the weirdest tales to have ever emerged from Hollywood, the worlds of art and culture, and the music industry. The new season also includes an all-star lineup of actors, many of whom portray some of the biggest names in pop culture.

Seasons one, two, and three of Urban Myths are currently available to watch or download on Sky's on-demand service. Alternatively, you can stream the series on NOW TV. Either way, its absolutely imperative you check out this compelling, and quite often bizarre, Sky Arts series.