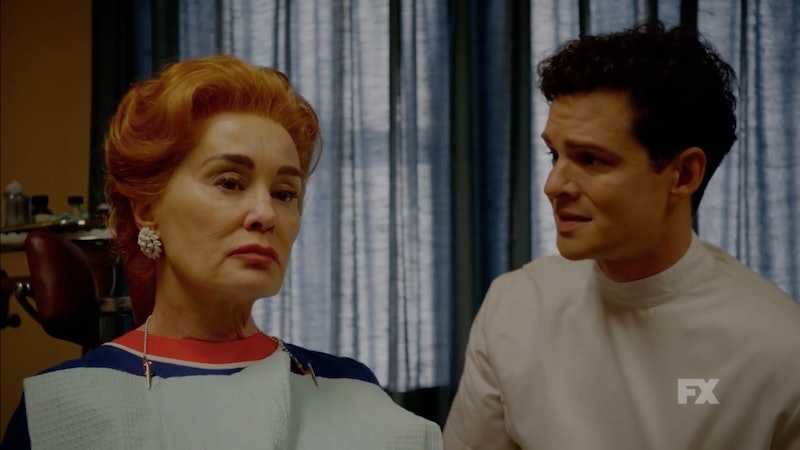 Plastic surgery may seem like a modern invention, but beauty-enhancing surgical procedures date back to Old Hollywood. And in its finale, Feud suggests that Joan Crawford, established as particularly obessed with maintaining her beauty throughout the series, received a procedure referred to as a "buckle," which involves multiple teeth being removed in order to give the star sunken, thin-looking cheeks. Did Joan Crawford really have her teeth removed, or is this just a Feud embellishment? Well, turns out that the real Joan Crawford did indeed have some teeth removed in her youth, but it wasn't just for visual reasons.

According to the book, Bette & Joan: The Divine Feud, "After altering the shape of her face by having her back teeth removed to give her cheekbones, she had her front teeth, which were spaced and filled with dental cement during her early days of filming, filed down to allow temporary caps to fit over them," writes author Shaun Considine. According to dentist Dr. Timothy Gogan, "[Joan] suffered from decay between her front teeth and around the root areas. At this time (1928-1930) there were no tooth-colored fillings and the only solution to decay was porcelain caps or crowns."

As for the nickname "buckle," that doesn't seem to be a term used at the time. However, "buccal" is a dental term that means the side of a back tooth that faces the inside of your cheek, which is where Joan had some of her teeth removed. As Considine writes, there were some unintended consequences. "The painful procedure, however, infected her gums, which stretched her mouth. When the swelling subsided, it left her with a larger upper lip. Pleased with the extension, she decided to paint in her lower lip, giving the world 'the Crawford mouth.'"

And Joan may not have been the only star to have undergone dental work that had some (intended or unintended) cosmetic consequences. According to The Huffington Post, it has been rumored, but never confirmed, that Marlene Dietrich allegedly had upper molars removed, like Joan, in order to exaggerate her hollow cheekbones. And Clark Gable's dentures (and resulting bad breath) have been a popular Hollywood story for decades, according to Vulture. By taking her existing tooth problems and turning them into a movie star smile, sounds like Joan made the best of a somewhat gruesome situation, but as she aged, her dramatic cheekbones may have come with a great cost.

As Crawford got older, she was plagued with health problems. Allegedly, according to biography Crawford: The Final Years, additional dental surgery when Joan was in her 60s, from 1972-1975, rendered her temporarily bedridden and on antibiotics. According to Hollywood's Second Sex by Holly Malone, Joan was on antibiotics, but for arthritis. The New York Public Library's archives of Joan's personal documents does include a health insurance claim for dental surgery in 1974 or 1975. However, pancreatic cancer and, ultimately, a heart attack are Crawford's official cause of death in 1977.