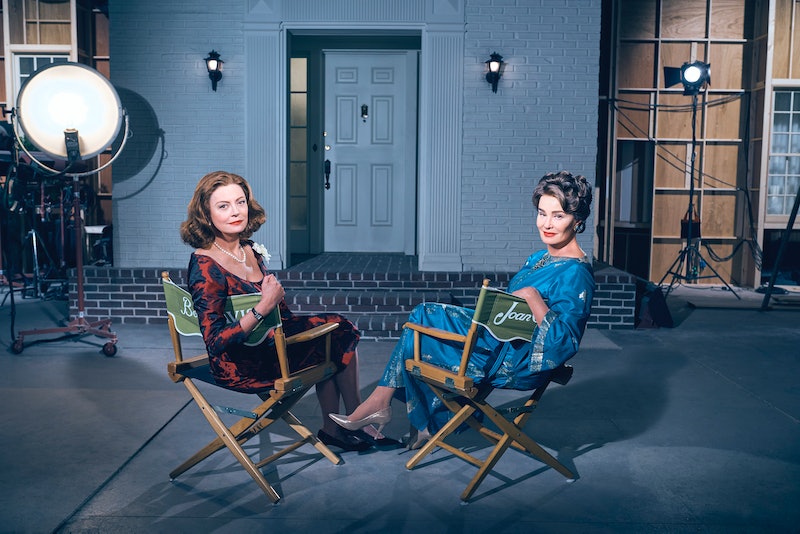 While Joan Crawford and Bette Davis may have despised one another on set of What Ever Happened To Baby Jane? without any intervention, Feud makes a case that it was the powers that be that created an atmosphere of animosity. Jack Warner demands that a reluctant Robert Aldrich pit Joan Crawford and Bette Davis against each other in Feud to make What Ever Happened To Baby Jane? a greater success. This idea that the women could be "greater still" only by tearing each other down is a troubling narrative that unfortunately has been seen throughout history many times before and is a major theme of Feud.

As a person who understands the allure of celebrities, I can see why the media so strongly desired to portray Davis and Crawford as nemeses — especially since it mirrored the contemptuous relationship their characters had in What Ever Happened To Baby Jane? Yet, Stanley Tucci's Warner took this one step further by saying their acting would improve if the women truly hated each other on set during Feud's March 12 episode, "The Other Woman."

Although a bad personal relationship could have fed into their performances, the view that the women needed to hate each other in real life to portray that "pure, naked rancor" in the movie underestimated their talents. Both Crawford and Davis were giants on the screen and didn't need such manipulation to create electric performances as Blanche and Baby Jane Hudson. Further more, it's hard to imagine a studio head asking a director to create a hostile working environment for two male actors in order to get better performances.

Unfortunately, what can't be blamed on Hollywood execs or the media is the willingness that both women showed to play into this narrative. For example, in Feud, Crawford and Davis both speak through the press to each other, with rather nasty comments, instead of just discussing any issues they had in person. It's a chicken or egg situation — would Crawford and Davis disliked each other regardless? Or was it because of how Hollywood made them feel that only one of them could succeed?

While women have often gotten a bad rap for the way they treat one another, I'm of the mindset that a lot of this "women sabotage women" idea has to do with the fact that women felt that they were at the mercy of men for so long. If another woman's failing meant you were able to succeed, you might be able to legitimize helping to bring her down in your mind. And that's something that Ryan Murphy is definitely playing with in Feud — just think how "The Other Woman" episode started with Davis and Crawford bonding over the removal of a younger, more attractive woman from the set.

I don't doubt that Murphy has an agenda in portraying Davis and Crawford as victims of male manipulation that may not be wholly accurate, but I also think he is showing with nuance that their feud wasn't based on just their own egos and cattiness. The relationship that Crawford and Davis had was fraught with tension, insecurities, outside influences, and even respect. So while this story of the complexities of female relationships is not always pretty, it's important that Murphy is telling it and showing that Crawford and Davis weren't the villains of each other's stories.

More like this
At 28, Melanie C Was Falling In Love & Reclaiming Her Confidence
By Olivia-Anne Cleary
Who’s The Richest 'Grey’s Anatomy' Star? See The Net Worth Of Each Cast Member
By Hugh McIntyre
Dan Levy Appears In The Latest Teaser For The Weeknd's HBO Series, 'The Idol'
By Jake Viswanath
'The White Lotus' Season 2 Trailer Teases Multiple Affairs & Another Dead Body
By Bustle Editors
Get Even More From Bustle — Sign Up For The Newsletter