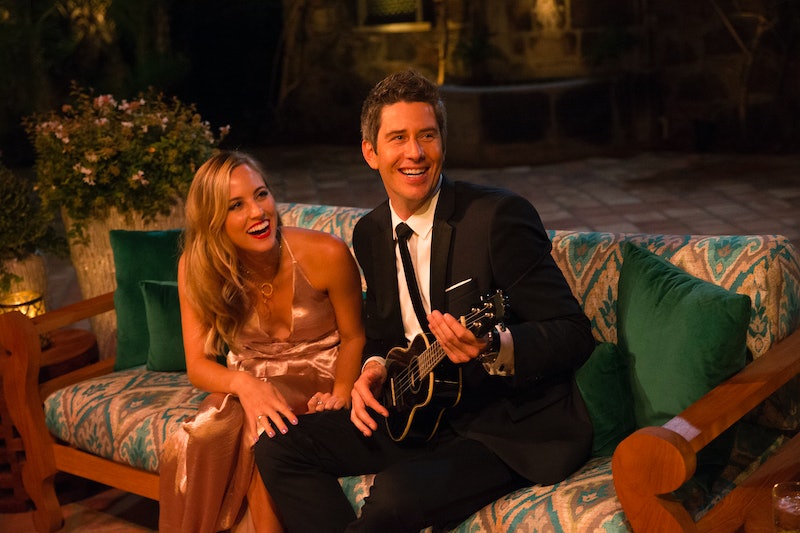 Going into the Fantasy Suite dates, it's hard to imagine anything topping Kendall's hometown date. What could be more entertaining than taxidermy? But on Monday night's episode, Arie and Kendall took the next step in their relationship by having an overnight date, giving the taxidermy a run for its money. So did Kendall and Arie have sex on The Bachelor?

Fans were surprised when Arie decided to keep Kendall and eliminate Tia last week, but seeing them together on this date in Peru made everything make a lot more sense. Not only did they have a blast on their date in general, but once they had the chance to sit down and talk, they both admitted that they're falling in love with each other. And, it seemed like all of Kendall's fears about commitment totally disappeared.

However, as always, the overnight portion of the date wasn't filmed. Honestly, whether or not Arie and Kendall had sex isn't important, nor is it any of our business — as fans, we're just here to enjoy the show, not pry too much into something that's so personal and between them only. They're adults, and they get to make their own decisions. Regardless, they seemed to have a really good date.

In the morning, Arie and Kendall woke up together and made breakfast in their suite, which seemed really nice — and definitely like something a real couple would do, so that might have given them a taste of what their relationship could be like once filming ends. And their talking head interviews about each other gave a lot away, too. Arie said:

"My night with Kendall was wonderful. We were up all night talking and Kendall and I really needed that time. I do feel like I gained a lot of clarity last night. I learned so much more about her and it really got me to the place where I could see us being all in and it feels great."

Obviously, since Arie's about to pop the question to one of these remaining women, it's a huge deal that he was able to see a future with Kendall after they got some private, one-on-one time together. It's good to hear that they did spend a lot of that time talking, though, because if you're about to get engaged, there are a lot of topics you should probably hit before making things official, especially if you haven't known each other for that long.

And even though one of the things that had been holding Arie back was the fact that Kendall has been open about the fact that she doesn't feel ready to be engaged, it sounds like that fear of hers no longer exists now that she's gotten the chance to spend more time with Arie and get to know him better. She said:

"I think last night I was just able to know so much more about where Arie and I are and where we can go and hope to go in our relationship. There's so much in him that I can see being an amazing father, an amazing husband. I definitely can see at the end of this being engaged to Arie."

That's such a huge difference in where Kendall was last week, so it sounds like if she's up for that final rose, she's ready. That's a big deal for her, so let's hope she truly is ready for this kind of step forward.

Now, we just have to wait and see how Arie's dates with Becca and Lauren go. It's definitely going to be interesting to see the rest of this season play out.