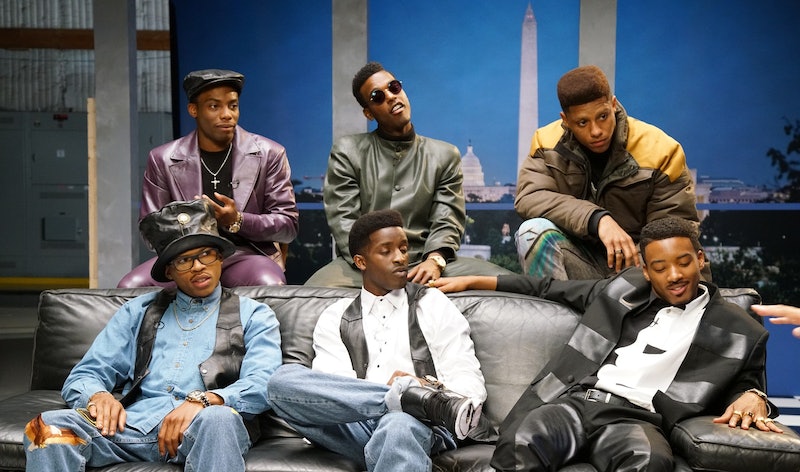 They were a five-man hit machine, but, in 1986, one key member of the vocal group abruptly left to pursue a solo career. So did New Edition really kick out Bobby Brown? Opening on their Home Again tour in 1997, BET’s The New Edition Story premiered the first part of its three-episode series and showed the band, under duress from manager Gary Evans, voting Bobby Brown out of the group. But how realistic is this, anyway?

Well, according to how the series was made: presumably fairly accurate. In an interview with Yahoo! TV, executive producer Jesse Collins stressed that all six members of New Edition were involved in making the show and that the show's writer Abdul Williams interviewed each member of the band individually before putting all six perspectives together to provide "the basis of the movie." Collins suggested that this method of researching the band provided unique insight into the story, even for the band members themselves:

These guys didn’t communicate how they felt about certain things ever, so a lot of things came out, a lot of warts came out, when they read this script.

If you've been following the Bobby Brown drama since it actually took place though, you'll be aware this doesn't line up with the last major time Brown's departure was publicly discussed by the other members of the group.

At a 2012 New Edition reunion concert in Cleveland, Brown stressed that he couldn't "forget when they kicked me out of the group," and he went on to outline what happened. Ralph Tresvant states that he wasn't kicked out, but that "Bobby came to me personally" and stated that, although he liked what they were doing with the group, he wanted to — and at this point, the audio's seriously unclear, but if I'm interpreting Tresvant correctly, because he sings this bit —"do what I wanna do" and left to pursue that.

Brown is incredulous and disputes Tresvant's version of events. He maintains (if in kind of a satirical tone) that:

Michael's nephew's niece told him, Michael, to tell Ronnie's uncle to tell him to tell Ricky that Bobby don't need to be in the group no more because he can't dance like them no more.

He clarifies that he doesn't think he was dropped because he couldn't keep up with the dancing, but that this was the flimsy reason given to him.

Again, to clarify, I don't think Brown genuinely believes in this chain of people passing on information to him. But I guess this signifies none of the band spoke to him in person and he just heard about his departure on the grapevine — which, given what Collins stated earlier about the band's communication problem, doesn't seem unlikely.

So what are we to believe? Since I believe a band member is more likely to be honest in a one-to-one in-depth discussion than on a stage in front of thousands of people and since Williams got to hear all the various versions of what happened, I'd err towards assuming the version we got on the small screen is the "real" version. But, as the concert video suggests, truth is often a pretty subjective thing — so really? It's complicated.