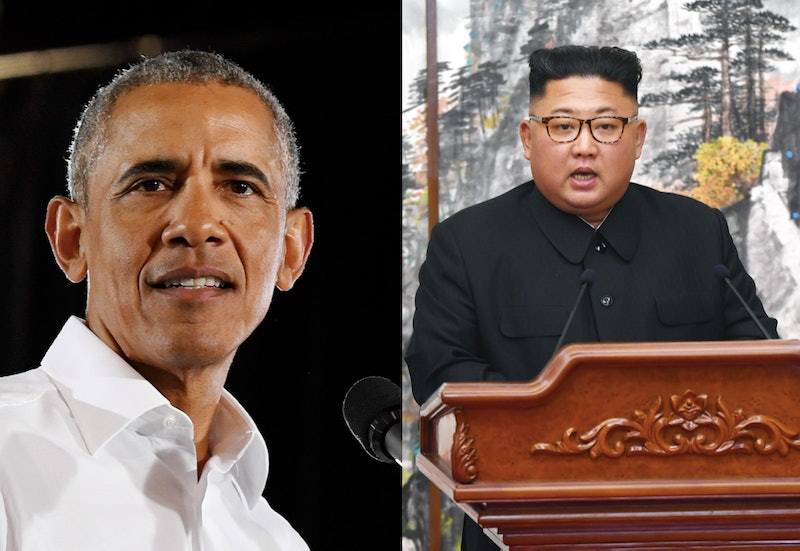 President Donald Trump is traveling to Vietnam this week to meet for the second time with Kim Jong Un, the leader of the Democratic People's Republic of Korea (DPRK). While the two leaders convene in Hanoi, you may find yourself wondering about whether it's normal for a U.S. president to meet with a North Korean leader — and whether President Barack Obama ever met Kim Jong Un.

Well, the 44th president never did meet Kim. In fact, when Trump traveled to Singapore to have talks with the leader last June, it was the first time that a sitting U.S. president had convened with the head of North Korea in the country's 70-year history.

But it's been a different story once they leave the White House. President Jimmy Carter, for instance, later visited North Korea twice — once in 1994, and once in 2010 — to pursue diplomatic efforts, including the release of American prisoner Aijalon Gomes. President Bill Clinton helped free two imprisoned American journalists during a 2009 trip. And other high-profile U.S. officials have visited while in office: Madeleine Albright, Clinton's secretary of state, went on a diplomacy mission to North Korea in 2000.

According to Foreign Policy, presidents have typically been reluctant to visit the DPRK while in office because they don't want to bestow its leader the prestige that comes with an official presidential visit. Doing so would imply a degree of normal diplomatic relations with North Korea, and that would help legitimize the DPRK regime, which the United States generally argues is undeserved.

But Trump was eager to break with that established practice. Last June, he and Kim met in Singapore for hours of meetings that ended with two promises that The New York Times' Mark Landler called "vague": North Korea agreed to get rid of one ballistic missile engine testing facility and the United States agreed to end the military exercises it stages with South Korea. Both leaders also restated their desire for denuclearization on the Korean peninsula. Trump argued that he'd developed a good rapport with Kim during the summit and called their connection "a special bond."

The president announced plans for his second meeting with Kim during his State of the Union address last month. "As part of a bold new diplomacy, we continue our historic push for peace on the Korean Peninsula," he said then. "Much work remains to be done, but my relationship with Kim Jong Un is a good one. And Chairman Kim and I will meet again on February 27 and 28 in Vietnam." The plan had been in the works for months; Trump had said in early January that his administration was working with North Korea to pick a location.

During this summit, Trump and Kim are supposed to come to a more concrete agreement about the terms for denuclearization. According to The Daily Telegraph, the DPRK leader is also hoping for a formal end to the Korean War (although an armistice was signed in 1953, there has never been a peace treaty).

Some within the Trump administration are skeptical about the president's ability to achieve his aims at the upcoming summit, while Trump himself seems eager and optimistic, according to Politico. Only time will tell who's right. Trump will meet with Kim on Wednesday and Thursday.