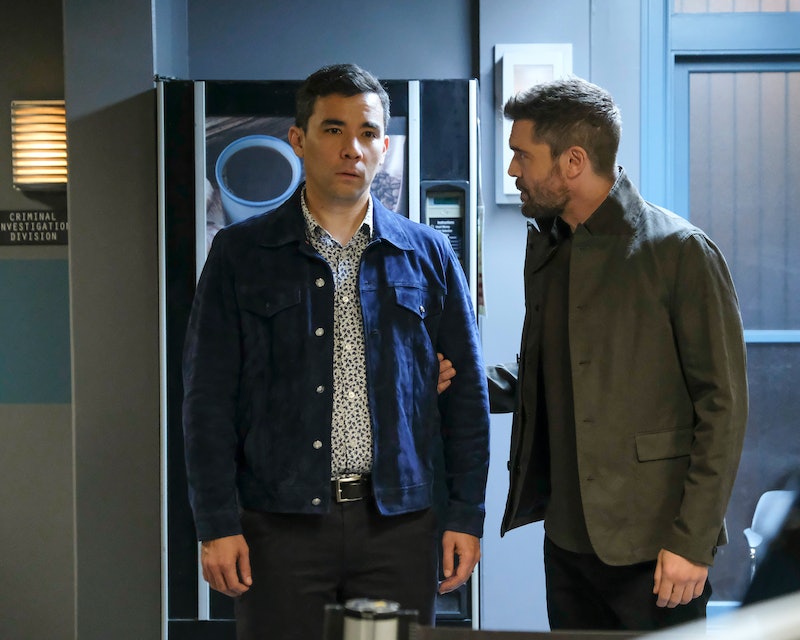 If How To Get Away With Murder has taught fans anything, it's that anyone can be capable of killing someone — even those you would least expect. So when a new flash-foward showed Oliver confessed to murder on HTGAWM at the end of last week's episode, aptly titled "I'm the Murderer," it shouldn't have been that surprising. After all, he's been a core member of the group for quite some time now, so it makes sense that he would eventually have to get his hands dirty. But did Oliver really kill someone or is this simply another red herring? It certainly wouldn't be the first time fans have been fooled.

Since the very beginning of the season, flash-forwards have hinted that an informant for the FBI winds up dead just outside of Gabriel and Asher's apartments. And while the victim's identity has yet to be revealed, the murder weapon appears to be a fireplace poker. Several characters have popped up in the flash-forwards thus far, including Bonnie, Asher, Michaela, and Connor. Now Oliver and Frank can also be added to that list, which helps to narrow down who the dead informant could be. But in regards to Oliver's confession, it's difficult to say for sure whether or not he's telling the truth.

In the scene, right before Oliver confessed, Frank was trying to convince him to leave, telling him that Connor, who was being interrogated, would be fine. This context makes Oliver's declaration — "I did it! Arrest me! I'm the murderer!" — seem a lot less like a confession, and a lot more like a desperate play to protect his husband.

True, it's always possible he could've killed someone — whether by accident or otherwise — but things are typically a little more complicated on this show. Nothing is ever straightforward, which means Oliver could simply be trying to protect Connor. Because, even if Connor didn't kill the informant, his presence at the station could result in some of his past misdeeds coming to light, and since Oliver now knows all of Connor's deep, dark secrets, he may be willing to do anything to keep them from coming to light — even if it means sacrificing himself in the process.

Also, let's not forget that Asher is the one with literal blood on his hands in the flash-forward scenes, which implicates his involvement in the murder just as much (if not more) than Oliver's declaration of guilt. Confessions are all well and good, but until viewers are shown some cold, hard evidence, it's important not to completely point the finger at Oliver just yet.

More like this
Netflix Shut Down 'Bridgerton' S3 Rumours About A “Very Dark” Storyline
By Bustle
Everything To Know About 'RHONY' Season 14
By Jake Viswanath, Alyssa Lapid and Brad Witter
'RHOSLC' Star Jen Shah Refuses To Do A Post-Sentencing Interview With Andy Cohen
By Brad Witter and Jake Viswanath
Bill & Frank’s 'The Last Of Us' Episode Has Twitter Emotionally Wrecked
By Alyssa Lapid
Get Even More From Bustle — Sign Up For The Newsletter
From hair trends to relationship advice, our daily newsletter has everything you need to sound like a person who’s on TikTok, even if you aren’t.